By 5th month slowly started introducing solid food like banana and apple puree to Aarush. According to our custom till "Annaprasanna" we are not suppose to introduce solid food like rice or wheat to baby. And his didu was also against using common baby food item like "Cerelac" as they contain rice or wheat. This resulted in his first solid bite being fruit -- mashed banana. The first spoon he swallowed as my mom fed him, but little man has a frown of disapproval, like "what the heck they are feeding me?!" Well, as predicted, he didn't like that much for the second spoon and started crying. We had to try again and again. Though we had apples and banana in the fridge for him it seems he started liking banana but not apple puree. His didu use to feed him making him sit on her lap. 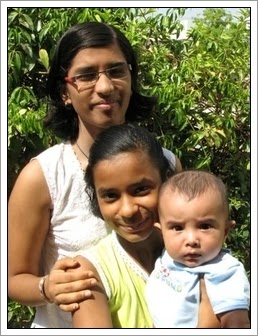 Our li'l one started to roll a bit; can be on his tummy. He tries to edge forward by pushing with his feet or pulling with his arms. Rarely adorable, toothless smile was given in response to our talk. He can make different sounds come out of his mouth – and was delighted in experimenting with them.
By June 1st when his sissy's left my son was bit upset as house was not buzzing any more. He had a great time with them. After they left he use to look around as if he has been deserted. On June 4th his parental uncle came to meet him for a day and Aarush was happy and playful that evening. Suddenly there was strike at Calcutta and uncle's flight was delayed that helped to spend more time with Aarush then expected.
This month was very hectic for Santanu as well me. We traveled a lot almost criss-cross the whole country. It was not only traveling but also move from Bombay to Bangalore, Santanu had to do it single handed. From finding apartment to movers, closing or transferring various accounts and establishments was not an easy task. Many a times we ended up in arguments over phone for not things going in a way one wished for.
At first Santanu came to Mumbai for 4 days when he spent two days with movers while they packed our belongings for Bangalore. After that he ensured gas connection is transferred which is essential for living in urban India. But lots of bureaucratic paper work as all domestic gas agencies are controlled by government and it is a regulated market space. From Bombay he came to Durg to take us to Siliguri. On June 10th we departed from Durg for Calcutta after our long stay. Aarush cried a lot during this flight but we had a great service from King Fisher hostess.
After spending a half day at Central Calcutta (Santanu's uncle's place) we left for Howrah Station in the night. The train was at midnight (23:50 to be precise). Journey by train didn't made him happy. He was OK during the whole day even though it was very hot and humid through out the day. Surprisingly, the ever crowded Howrah Station did not bring any adverse effect on him. But as soon as we got in to the AC compartment he started to cry incessantly. May be because of claustrophobia or some other discomfort can't say....he cried and wailed that were enough to wake the dead. Luckily the compartment was empty and we had no co-passenger complaining.
We went to Siliguri for his first rice ceremony which his thamma arranged. It was five days function similar to that of Bengali marriage. On June 16th, he first tasted rice without any fuss. It was a lot of hard work, preparations and although we were dog tired, it was well worth all the effort. All our expected guests came. There he met many relatives as well people from neighborhood. Things went smoothly once we reached there.
at Friday, May 15, 2009 No comments:
Labels: Aarush, Annaprasanna, baby, baby food, banana, solid food
Older Posts Home
Subscribe to: Posts (Atom)