The moment a child is born,the mother is also born.She never existed before.The woman existed, but the mother, never.A mother is something absolutely new.
~Rajneesh

As soon as I was moved out of O.T. Aarush was brought to his crib next to me. His didu was first to hold him in her arms then was given forcefully to his thamma. She didn't wanted to take him as it seems he would become "Kol-lengra" (will get use to be in arms). His didu & nanu were extremely happy on his arrival as he was the first boy in their family of daughters and grand-daughters. My bottom part was still paralyzed. Since I was half conscious soon both new mom and son were sleeping. In the same evening, I was feeling sick while everyone in room looked busy. Hubs busy seeing his offspring, taking picture running here and there... taking all those phone calls, sms
... . I laid there looking around. My mom was there day and night at my side.

I was to stay here for complete 5 days. During the stay in hospital, I was asked not to take bath but only sponge for 10days from date of delivery while an old attendant used to give bath to Aarush. She was a charming lady always helping and giving tips to a first time mothers like me.
The first two days was very difficult for me as I was not able to move myself neither can sleep on sides because of IV and going out of bed was like climbing Mt. Everest. On third day doctor removed the catheter and asked to go to loo by myself or with help. But at any cost I was asked to get out of bed which really killed me almost.
Who on earth says its better to be operated. My personal thinking is both normal delivery and c-section has their own plus-minus points. I heard and read from different blogs about normal delivery; labor pain is hell but the recovery is quite quick while in c-section birth is easy but recovery is excessively painful and long. To get up from bed after operation I had to call attendant so that she would hold me and I can drag along with her to the toilet, each steps felt like a mile. The tip is to start walking straight from that moment onwards however it pains you just need to do it. Although you feel a pull at the stitches but this is normal. Walk as frequently as possible even if it is just a few steps at a time. You will gradually find it easier to walk. 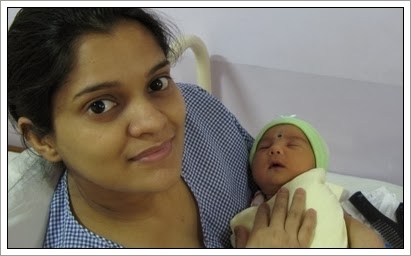 On third day doctor asked me to start feeding Aarush; but it looked like I was not lactating so he was given formula through syringe. After taking medicine I started lactating but he was not ready for breast-feed. He did not like to work hard for sucking the milk while formula was dropped inside his mouth. He does not have to do any effort for that. He really made me feel miserable because of sleepless night from that day. He was hungry but he did not wanted to take my milk and doctor was now adamant on breast feeding only- “No more top milk and no water only breat milk till any solid is started”. On 4 th day somehow he tried but very poor job. Being first timer I too never knew how to feed. Result- got sore nipples. Then on 5th day pediatrics came to show the proper latch which really helped. And she added no cream for sore nipples- mothers own milk will heal it. The same evening I was discharged from the hospital; we reached home just before dusk.
Before discharge I was given certain advice by my Gynae. to minimize pain and soreness as stitches are done in layers - No excercise at Gym for next 6 months- walking is best excercise.No lifting of heavy things for 2 months.Not to go near fire for 3 months.Resting helps to heal so don't even laundry,clean or do dusting for atleast first 2 months.
At home we were welcomed with blowing of conch shell and ululation. Everything went on smoothly till middle of night. Aarush's crying session started as out of habit he wanted top milk without effort. That night was really long for whole family. Neither Santanu nor my parents had sleep because of his crying. Whole night I kept trying to feed but in vain. Santanu and my mother were very anxious as yet Aarush did not started breast feeding.
I experienced “A baby who has been crying for some time before being tried on the breast may refuse to take the breast even if he is famished”. We made all the arrangement for the formula but we knew if we give him top milk - it will be almost impossible to give up this habit of top milk. Atlast, on Tuesday morning when Santanu was about to heat water to make formula around same time he started to have milk. Oh! God what a relief that was for every one; soon both Mom and son were having a sound sleep after a grueling night. It took 6 days for both of us to learn the technique of feeding and to be fed.
at Wednesday, February 25, 2009 No comments:
Labels: Aarush, baby, breast feeding, pregnancy

It was 11th Jan when I went to my gynecologist in emergency as couldn't feel the movements. After check-up she mentioned that if my baby didn't arrive anytime sooner than 15 she would have to perform an induction. She didn't wanted to take any risk at this stage because of cervical incompetence and heart problem. So at last, we opted for planned c-section on 17th Jan.


Night before took admission at MGM Belapur, Navi Mumbai. This time I knew few of the nurses and attendants quite well from my last stay at hospital (3 months before). Those who were in night duty came to me giving encouraging words for next day. Most of the night couldn't sleep because of anxiety. Being a first time mother, I was completely blurred on labor. On d-day very early morning I took a preoperative shower; getting ready for this big event. From morning onwards I was asked not to take water or food and was on IV till I was taken to O.T. It was Thursday, around 11 am my waterbag broke; I got scared & nervous at first thought to myself. Finally the time has arrived for my baby to be born. Immediately my ob-gynae. was informed and I was prepared to be taken to OT. Everyone was busy monitoring baby's movement and heartbeat every few minutes as I laid on the bed. They wheeled me immediately to OT. Junior doctors, my gynecologist, anaesthesiologist, cardiologist – physician and pediatrics were already there in the room. They were talking among themselves as well to me to keep my mind diverted.


They moved me from trolley-bed to Operation table which was really narrow . Ceiling suspension lights were turned on. On one side there was table with their instruments and items such as pickups, scissors, scalpel blades and needles etc. Phew.. seeing them my heartbeat raced, eyes rolled big. My gyne. was already ready in her surgical attire with gloves, caps, masks, suture sterile gown and protective eyewear. Soon my cardiologist along with anaesthesiologist went through the report and explained what he is going to do, what would happen and how I will feel. VOILA! He made me sit straight and his juniors started preparing my back skin with antiseptic agents and there after he administered 2 or 3 injections at spinal cord. This was local anesthesia (partly conscious) compared to what I experienced before during 6th month which was general one. While junior doctor helped me to lay on my back again. These injections almost paralyzed me from bottom. As shadow less mobile operation light was switched on I surrendered myself to my doctor while she comforted with nice pretty smile.


As I lie with my lower part paralyzed, hands strapped far apart. Once finished with the catheter, I requested them to blindfold me as could not take anymore of those sharp instruments coming that close to my body. It took hardly few minutes (10-12 min.- I suppose) for my gynae. to take out the baby from womb. What I understood is stitching is long procedure compared to that of delivery part. “It’s a male” she said barely discernible over the loud crying when someone spanked his bottom. After delivering the baby she left the room while cardio-physician and anesthetist remain to do rest of their job. Arrgh... God the whole process went well. Around 12.40 PM Aarush was showed to me...he was so tiny then weighing 3.5kg only. The doctors and the attending staff were the most loving people and I just felt very cared for and attended to. 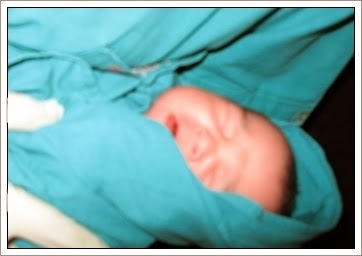 Here he starts his arduous journey to outside world with elbows bent, hips and knees flexed, arms and legs held close to the front of body. His nails were sharp enough to hurt one, with fine soft hair present on face, shoulders, and back.
at Sunday, February 22, 2009 1 comment:
Labels: Aarush, baby, pregnancy

Friends and near ones use to ask me quite often then - Do you feel the movement?

Somewhere, I use to wonder how it feels like the movement of the baby inside. It was tough to answer as first timer. On routine check -up my doctor asked the same whether I feel the movement and I nodded in negative. Immediately asked her how it actually feels. She says like bubbles or you'll feel tiny flutters as your baby moves – I smiled and said yes. I had my very first experience on 5th month.

There's something really special about feeling your baby's kicking, squirming. You begin to realize that some life is really inside you and that is just as exciting as the first time you heard your baby's heartbeat or caught a glimpse of her moving during the first sonography.

You begin to feel the movements as your baby's bones harden. Movements become more intense with hardening of bones as baby grows. First-time moms like me usually feel their babies move bit later than experienced ones.

As naughty as our son already is, he use to kick like as if having fist-fighting inside or trying to create more space for himself by stretching. Even his dad could feel his kicks by placing his hand on my belly. We enjoyed as he use to mark his presence by movements. At earlier stage it use to be rare but slowly and slowly I felt his kicks several times a day, every day. It is just amazing! Later even doctor asked me to keep an count of number of movements. According to her, it should be 10-12 per day.Certain time felt jabs from his arms and legs. But baby does not move all the time. They have their own patterns.