Letter to my son 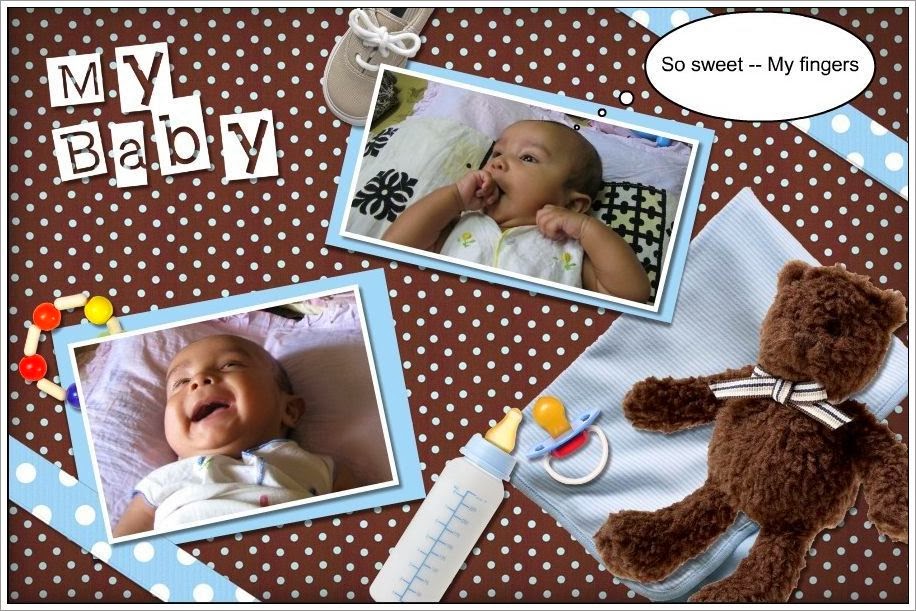 Today you are four months old...though nothing remarkable but for me it has been days now since we met last. Hope you to be fit as fiddle.
I came to know from your mom that now your vision is focused more or less, you are trying to grasp objects; can bat and swipe at dangling toys. It seems now you are ready to rock and roll as you have started taking side turns with squirms, giggles and wails... You respond to your nani (granny) and aunt with big toothless smiles as well with coos and making happy noises. Do you still continue to often soothe and calm yourself by sucking your fingers; and do you bicycle your legs and wave your arms when placed on your back with jerky movements.
Hope your head and neck muscles are getting stronger and able to lift your head to look around. I know that these muscles will still need support, so we have to be careful to guard your head and neck while lifting and holding.
Well, enjoy your time with your aunt and two elder cousin sisters. But do n't get spoiled with too much love, care and attention.
Darling, it seems besides all care and love you are not keeping a good progress as recommended by your doctor. I just want to let you know that 'am are not worried as long as you are happy and at ease.
Sorry my child, I miss you a lot and hope to see you soon. You are always in my heart and on my mind.
Loving you... Your's DADA
P.S. - For others please check Aarush new pictures
at Thursday, May 15, 2008 No comments:
Labels: Aarush, car, letter, picture

A four letter word of our modern consumerism; like all other 4 letters words this is very commonly used.
The first time I was introduced to this was back in USA on Labor Day weekend (1st week of September-’98). In US, every long weekend brings a SALE. Size of weekend supplement of news-paper increases with advertisement from cars to toys. Not only that even you get constant reminder from Macy’s to Wal-mart on your radio while you drive your car.
In France or continental Europe, it is different; the retail store only has two sales in a year normally for cloths. In July, it is to clear spring and summer collections and get ready for autumn and winter while in February to make room for summer. But never happen to notice for car or computer; may be I was not looking for car.
Now, when I reached Singapore, two weeks before big summer sale was going on. One such place is Orchard Road which is known for its retail and entertainment centre. This Orchard Road is flanked by malls (houses brand boutiques), restaurants, cafe, nightclubs and hotels This picture was taken inside of Takashimaya -the famous Japanese super store.


Reading the article in Wikipedia it became clear why there are so many sign on the side-walk with fruits it seems it used to be fruit orchards in 1800s. Well, people say the same about bay area where there was Orchard once -around 1960ies before it became Silicon Valley.
at Monday, August 06, 2007 No comments:
Labels: car, drive, letter, nap, orchard road, people, picture, reading, road, sale, shopping, Singapore, Wal-Mart, weekend

On the 9th of April we were supposed to collect our new Titre De Sejour (Long term VISA) from Cite Prefecture de Police. The interview was fixed almost 3 months ago and we reached there before our scheduled time to be make sure this time there is no big problem. But our turn came around 4o'clock which is almost one hour behind our scheduled time. And after checking all our paper she says oh! You need to pay 55 Euros now as you got a new passport. Then the trouble started - so I went to another counter to buy Notary Stamp for the same amount. But they only take cash which I did not had enough at that moment. So after asking them where is the nearest ATM I went out and on returning with cash....?The main entrance was closed so I tried to persuade a lady police to let me in as my wife, my passport every thing is inside and I am stuck in this "no man land". She didn't understand anything or doesn't wants to understand at all. But with repetitive appeal she understood or got bored with me to let me in. But to my surprise ? GOD!!! that counter got closed to give any Notary Stamp. So, trying to behave properly and without loosing any temper I asked that lady on the counter to get me some thing in written officially so that I do not become an refugee in France for next few days till I get my new visa. It again took some time and repeating the same problem she wrote it on paper that I need to come back on Tuesday morning after the long weekend of Easter. And best part was Pamela got her work done without any problem.The problem is French people cann't think other than French way and I sometime think they even don't know there are other way(s) to the same which might be better than their way. Just to say - to cancel your cell phone contract it takes two months after you send registered letter with acknowledgement but, taking a new connection it only takes an hour.Thankfully, no one asked for my passport during these past 3 days and I again had to wait for 2 hours in the same place for getting 9 month of Extension to stay in France.
at Saturday, May 10, 2003 No comments:
Labels: ATM, letter, Paris, people, weekend
Older Posts Home
Subscribe to: Posts (Atom)