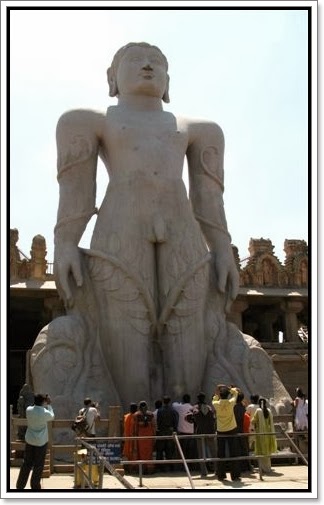 Me and Aarush just returned a day before Santanu’s birthday from Durg and he wanted an excuse from strenuous week at IIM-B and we ended up planning to visit Shravanabelagola right after Diwali day. Unlike his earlier trip he just had a casual look at the route map to Shravanabelagola, it is a religious spot, a Jain pilgrimage centre. The place is famous for 58ft. high monolithic stone statue of the Lord Gommateshwara.
Yeshvantapur -> Neelamangala -> Kunigal -> Shravanabelagola
Morning 6.30AM we started; roads were full of potholes from Yeshvantapur with flyover construction still going on till Neelamangala where we lost route after taking 2 U- turns ended up asking locals then got into right road(NH-48) but that was again full of pot holes.We had breakfast at Hotel Mayura on the way, it was almost 11; Aaursh enjoyed their play area.
Then we headed straight towards our destination and reached Shravanabelagola without much problem as roads were marked properly. The two stony hills called Chandragiri and Indragiri on either side with lake in between makes famous Jain pilgrimage center. Just within gate you will find a paid toilet and shoe stand where you have to leave your shoes and climb up this hill by foot. Flight of about 660 steps to the top, cutout in the rock, people of all ages climb these steps. For elderly or handicapped people there is a palanquin transport service available to avoid the strenuous hike. These rough rock cut steps are steep at places; we had socks on our feet as the rock gets hotter as with days. We began the climb and stopped in-between to get our breath back and took some pictures. It took  around 30 - 40 minutes to reach the top. On the way up, we found breathtaking views of the Chandragiri temple and the lake in-between.The huge statue of Bahubali and the view around is stunning. It is carved beautifully from a single block of rock with accurate sense of proportion and expression. All the 42 Tirthankaras carved figures are there in the corridor around the quadrangle. The Downhill was more enjoyable, as you had to court gravity and slope.It is equally steep so better be careful !!!


Took about 30 mins to reach the base of Vindhyagiri.There are numerous homely Marwari / Jain food available in the nearby lane on left side while you enter from the gate I strongly suggest you plan your lunch either here in one of these since its a different experience OR best is to have free lunch at Official  bhojanalay. Small by-lane next to gate on inner side along the office goes straight to Dharamshala with a big gate where after giving donation you can have lunch which is served to you in rows umpteen times.


After having lunch here, we went to the place where Chandragupta breathed his last named Chandragiri (Chikkabetta) hill. It is a small hill is located just opposite to the Vindhyagiri hill. It has memorials to numerous monks and shravakas who have meditated there. Steps have been cut out in this hill and the ascent is not different from Vindhyagiri. After spending there till 4.00pm we started our journey back home via Mandya. Aarush went to sleep as soon as car started to roll. The road via Mandya was better as there was not much traffic and not those potholes even. Aarush woke up next day around 9AM a record which we still recollect.
TIP: Carry pair of socks to avoid buying there so that if needed one can use it as with sun's brightness rocks tend to become hot making it almost impossible to climb bare feet.
at Sunday, March 06, 2011 No comments:
Labels: Chandragupta, jain pilgrimage, Karnataka, shravanabelagola, Vindhyagiri
Older Posts Home
Subscribe to: Posts (Atom)