Today we got up very early to take a quick trip of city as we did wanted to go back to snow clad beauty of Switzerland instead of its Mediterranean lake shores. But before having a heavy breakfast, we took a promenade in the park along lake shore where there are lots of open sculptors from Dada movement. After we took funicular ride to Madonna del Sasso.

We were determined to take glacier express from Andermatt to St.Moritz today. So, by 9.00 we reached station; Santanu saw a BBC program about Wilhelm Express on TV and was eager to board the same from Locarno till it connects Glacier Express. But due to train schedules we had to take an inter-regional train from Locarno to Goschenen via Bellinzona. Our compartment was vacant with two of us only. That left us to hop from one side to another in order to take photos as the train made turns to gain altitude. Being a standard train the chief advantage is the windows generally can be opened, for cool air and unobstructed views and take picture – with no ghost image.

On reaching Goschenen we immediately boarded another train to Andermatt where we spent an hour taking photos. Swiss trains are like Swiss watches never late-always on time so was Glacier Express 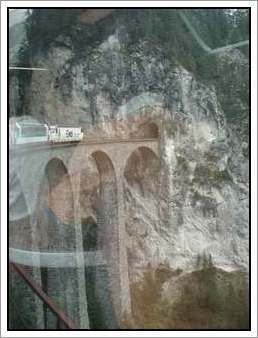 This train actually starts from St.Moritz to Zermatt or vice versa which is of 7 1/2 hr. journey across 291 bridges, through 91 tunnels and across the Oberalp Pass at 2033 m altitude. It’s really incredible journey via beautiful landscapes with valleys, glistening mountains & splendid greenery. It’s a train with huge wrap-around windows, allowing you to see through part of the ceiling no wonder why visitor do not complain spending bucks. You never know how alpine panoramas hits right in the face unless you experience it. But, the windows in the panoramic cars generally can't be opened, means photographs usually come with a glare.

As soon as we boarded the train, memories from Bollywood movies got refreshed. As there are umpteen of songs featured on this train. Unfortunately, we did not have window seats. And as it was mid-day lots of people were having their lunch at their seat. The dining car was next compartment to ours; we spent a good time there. Glacier express is a very touristy train as people from every corner of the world try to taste Swiss Alpine beauty. We had good conversation with our co-passengers who were Americans staying at Saudi Arabia.

On reaching St.Moritz we had a nice meal freshly prepared at Railway restaurant. As staying in the classic alpine resort was out of our budget so it was more economical to board a train for final destination to Zurich via Chur.

The train back from St-Moritz was a normal one which was good as that allowed us to take pictures with out glare. The journey from Chur to Zurich was also very scenic as the train runs along two lakes - Lake Walen and Lake Zurich.
at Sunday, July 16, 2006 No comments:
Labels: andermatt, car, dada movement, glacier express, journey, lake shore, Locarno, people, picture, rain, Swiss
Older Posts Home
Subscribe to: Posts (Atom)