(17th April - 16th May)
Normally A is taken to doctor for monthly check-up once other then that no outing for him. As he is considered too small for all these by my parents. So they neither allow him nor me to go anywhere. After birth it was third time when Aarush was taken out of the house to meet people other then his doc's clinic. Moreover because of weather it was difficult for us to go anywhere. Worst thing about his nanu's place was sultry sun(temperature reaching 49 º C) because of which most of the time he use to be in front of air cooler.
On other hand, its truly becoming irresistible for his dad I suppose. As he came again to meet his son at April end - his heart was at Durg and mind at Mumbai.
By now our lil one was able to keep himself engaged by holding a rattle in his hand for quite some time. His maternal aunt along with two sissys came to meet him. They were with us for a month. This month was full of entertainment for him with so many people to take care. His sissys were too excited to have him as their brother. They use to play a lot with him even tell him stories while he use to listen very carefully without any noise – as if he understands everything. 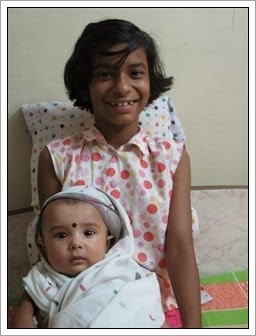 Quite often he use to cry in irregular pattern. At first, it made us difficult to understand what actual problem is. Was it out of hunger or feeling hot or some uneasiness. Every few hrs he will cry as he is hungry. Me and my parents were worried that he may be suffering from colic, but then again, he slept well when it was time for him to sleep and played and laughed happily in excitement when he was being teased. However, when it was time for milk, he just refused to take in much, often taking only few ounces. Certain nights were really miserable as I had to feed him after every 2hrs. Since I was with my parents it was of great help at these times. They use to take care of him while I use to catch some sleep at day hours.
It seems this problem is common among babies at this stage, and whenever they get hungry, they would drink. With Aarush, the slightest noise or movement distraction would make him turn away in curiosity, no matter how much I try putting back in his mouth. Now he drinks his milk whenever he is hungry, not on any schedule.
at Wednesday, April 22, 2009 No comments:
Labels: Aarush, babies, baby, sleep
Older Posts Home
Subscribe to: Posts (Atom)