Applied for a whole week off in December as I had 25+ days off to take for year 2008 - this gave us 9 days off with two weekends. I preferred a week before Christmas to avoid traffic and tourist. Initial plan was to leave Bangalore on Sunday for Mysore and move from there depending on Aarush's comfort. Stepping out of the home with him means a disrupted routine and adapting to a new environment for all us. Somehow, I was super lazy on Sunday and postponed the travel for next day. Even while dining on Sunday we were discussing just to be in Bangalore for whole next week or not. Then I concluded the discussion by saying- "we will start tomorrow(Monday) very early morning." 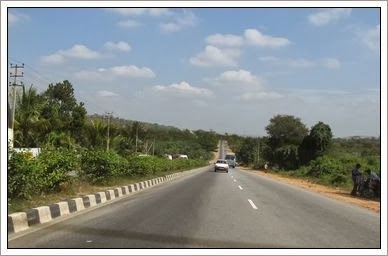 Next morning we could not start early either because of apathy; we started with normal daily practice and by the time we left home it was 11:20 on the clock. Aarush dozed off as we crossed Bangalore city limit and car picked some speed. He woke up when we reached almost outskirts of Mysore. I was driving with comfort as it was 3rd time on the same expressway in a short period of time. Followed sign for the Mysore palace and reached south gate entrance.

We had our packed lunch in the car before entering the palace compound. Bargained & hired a guide to show us the nooks and corner of the palace. Cameras are strictly forbidden inside the palace and we also had to leave our shoes outside as we enter the palace. Without going into details the palace is awesome; well maintained in Indian standard but not up to the mark like those of "Châteaux de Loire". The work and craftsmanship inside is too good which highlights how rich Maharajas of Mysore were. They had natural resources at their disposal like Kolar gold mine, Ivory and varieties of expensive woods to fulfill their hearts wish. The campus also has 27 temples almost at every corners of the compound.
It was dark when we left palace car parking and headed for a hotel. Initial choice was Ginger (new no frill hotel from Tata) as I did not stopped on the way to note the phone number we opted for Hotel Paradise. We were lost in dark while finding the hotel though we were certain we are in the same neighborhood and then a lady Samaritan guided us to the same on her scooter. The room was nice and clean; it cost us about 2000 (san air conditioning) rupees. A old fashioned beautiful hotel with nice view to whole city. The structure is old but elegant. We discovered the well kept and manicured Hotel garden next day morning.
After whole days of activity Aarush went to sleep very early skipping his normal dinner. Around 4 AM he woke up with full energy and started banging phone and other objects on which he could lay his hands. After one and half hours of playing he dozed off as the east sky was bright.
We woke up late; I called a friend at work who had been to Coorgweek before for details. After getting the contact called the same home-stay letting them know - we are coming today itself. This caught the owner off guard as he was not prepared for any visitor during the week but he said he will go to the market and dinner will be ready for us tonight. 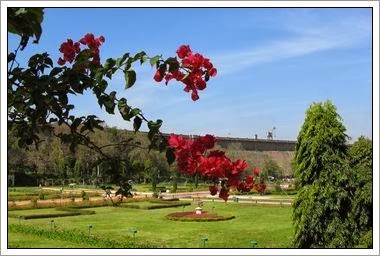 After breakfast we picked some necessary things before hitting the road for Brindavan garden; it was already 11 AM. Brindhavan garden is only 15 KM from Mysore but the condition of the road started to deteriorate as we reached closer to the dam. It is just horrible with big pot holes; big trucks carrying river stones are the culprit for the road condition.
Being Tuesday, there was hardly any tourist in the garden. This garden is brain child of Sir Mirza Ismail influenced by Mughal design. The dam was built in 1927-32 by Wodeyar rulers of Mysore on river Cauvery. In recent time, there have been renovation work going on to beautify the garden and its surroundings. Old guest house have converted to Royal Orchid Hotel; kept wondering who goes there to stay on business or leisure. Only thing I could think off was to have corporate off-site meeting there.
After Brindhavan garden we headed towards Coorg via SH88.
at Tuesday, February 17, 2009 No comments:
Labels: car, Christmas, Karnataka, Kingdom of Mysore, Mirza Ismail, mysore, Royal Orchid Hotel, Wodeyar dynasty
Older Posts Home
Subscribe to: Posts (Atom)