Drive from Kanyankumari was smooth, Aarush took a small nap. The road was undivided two lanes so the speed was limited but the lush green from paddy field , coconut grove and plantation leaves was pleasant for eyes. We reached Kovalam as per our plan, saw sunset which was magnificient. It was great to watch perfect sunrise and sunset on a same day. Public Beach was next to Taj and Leela hotels where large part belongs to them for their private beach. Now we started to search for hotel and ended up with Blue Sea. Did not find anything special but food was definitely good and the property looks like going down the hill as two brother split on the same. 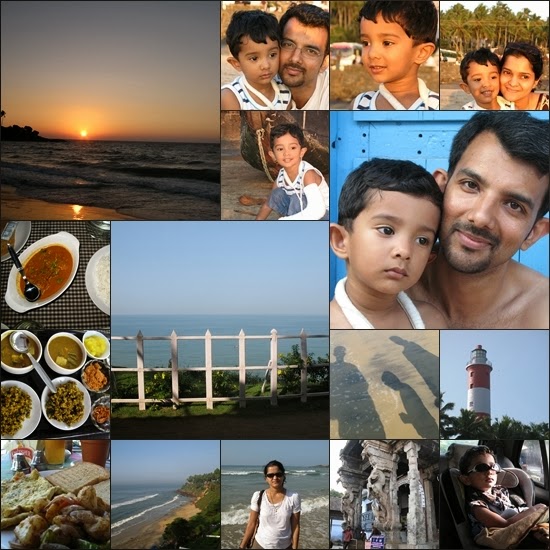 Next morning we went geared up towards light house beach which we found to be much more serene compared to earlier one. It has long stretch to take a stroll. Had our breakfast at one of the sea facing restaurant; there were some reasonable price hotels with a view need to explore sometime later. Aarush and Santanu went inside the water to take a dip. Aarush with his plaster initially was reluctant but once he got used to the waves wanted to spend more time there.


At afternoon, came back to our room had lunch and some rest then went to Thiruvananthapuram to visit “Sree Padmanabhaswamy Temple”. Drive from Kovalam to city was was not long but full of traffic. One of the 108 sacred Vishnu temples in India displays a supreme blend of Kerala and Dravidian styles of architecture. The temple has strict order where only Hindus are allowed and male must enter bare chest and wear dhoti. Even for Aarsush they had a dhoti to rent. From there we went in search of place within Thiruvananthapuram to see Kathakali and martial arts but in turn ended up seeing Napier Museum, Oriental Research Institute & Manuscripts Library and other old heritage buildings which was worth passing by but we failed to capture them in moving car. Unfortunately, these all are on main roads where you cannot stop unless you park your car properly. One thing definitely caught our eyes was the number of jewelry/Gold shops. Around 8 PM we returned to our room so that we can have early dinner and head off early morning to next spot Varkala beach. Settled the bills with hotel for a early start.


Left Kovalam at 6AM and crossed Thiruvananthapuram city without any traffic jam this time. Varkala is also famous for the 2,000-year old Janardana Swami Temple considered as Dakshin Kashi. But we skipped and headed straight towards beach around 7am it felt like heaven. Really worth it would be staying over there. Since we have already booked for that night at Kumarakom we could not make it. The views of the sunset sunrise are worth lingering over. The cliff and the beach house a lot of resorts, restaurants and other shops. The cliff has a long stretch of small shops which goes on for over a kilometer where we took a walk and had breakfast in one of the restaurant there. Looked like Varkala is more famous with foreigners. The breakfast was great as we had some European breakfast.
at Tuesday, August 14, 2012 No comments:
Labels: Blue Sea, Kerala, Kerela, Kovalam, Trivandrum, Varkala beach
Older Posts Home
Subscribe to: Posts (Atom)