It has been such a long time that we posted something we almost forgot how to type long paragraphs. Maybe all due to Facebook and WhatsApp which is instant but then in when you look back you have no way to figure out what all the noise was about. Well enough of rant now let me type….

Beginning of 2017 we were very much looking for a vacation and Pamela was interested in Uttarakhand. Now Uttarakhand is not a big state, it was carved out of Uttar Pradesh around 17 years back(A.D.2000 to be precise). But being a hilly region you can not just go around and see it all. There are two main parts Garhwal & Kumaon. And we were lost in between which part to visit. At the end, we made up some plan after talking to friends who are quite familiar with the UK. That made me more confused. Now comparing to the trip of Himachal Pradesh 3 years back, I was quite sure would be able to drive myself in the hills unless we plan to visit high altitude areas where roads would be narrow and tricky. Also if you recollect there was a major natural calamity in 2013 which washed away most roads and caused havoc during the peak of summer vacation. And I was not so keen for Dhams ( seats/abode) yatra as it means visiting temples and religious places. So at the end, I posted my planned itinerary in team-bhp. Now, as usual, got useful advice and modified our itinerary accordingly.

Now the plan was to fly to New Delhi and then rent a car and drive to Uttarakhand.  Here is the high-level plan.

Hotel bookings, I pre-booked Corbett Tiger Reserve using their official website. The booking to Corbett is very tricky. You need to be on online and ready and at your best, I had my caffeine shot just before 10. The booking opens 45 days prior for Indians. And without night booking Dhikala region the best region to explore within Corbett remains off limit to you.

If you are serious about CRT, my simple advice is you MUST have a booking at Dhikala. You will see and capture what is totally depends on your luck. But just for the experience, you must do the booking in Dhikala zone. The other zones are small and open for day safari as well so that way they become more crowded.

Rest of the Hotels are booked via KMVN and GMVN website directly. Also booked Kausani well before hand as it looked like a good option again Team-BHP.
at Wednesday, May 31, 2017 No comments:
Labels: India, Tiger reserves of India, Travel, travel plan, uttarakhand

The long waited Summer Vacation of 2012 ; earlier we used to escape the peak season madness now we are in the madness since both Aarush and Pamela are now part of active school. And we are going to be like this for years to come with no other choice. With that said, still wanted to avoid the crowded destinations. We wanted to visit ‘ Nilgiris’ the number uno summer destination of South India and picked Mudumalai, Ooty(Red Hills) and Connoor. We booked Red Hills Nature resort first, Wild Acres in Connoor second and at last Jungle Lodge at Masinagudi. All these booking were done with at least month in advance keeping in mind pick season.


We started from Bangalore on Sunday 15th April. The plan was to start very early morning but the alarm in BlackBerry was only for weekdays and it did not buzzed as it was Sunday (alarm only on weekday). We started from our home around 6:30 AM the traffic in Bangalore-Mysore was as usual crazy. Reached Mysore around 9 AM and stopped at Kamat near Mysore-Zoo for breakfast. From there the road to Masinagudi is 100KM and we had to travel on typical Indian 2 Lane Highway (undivided). The drive was nice only in the last part of Karnataka side there were many unmarked speed breaker in Bandipur Forest range. On the way we spotted many spotted deers. We reached Masinagudi in high noon with scorching heat and filled up the tank with diesel there. The road to JungleHut is well marked and we reached around 12 there. 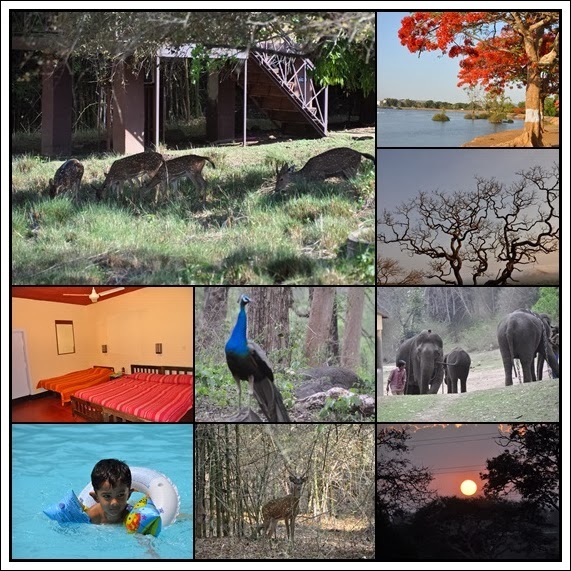 Host welcomed us with warm greetings and invited Aarush for b’day party later in the evening. Aarush was very keen to jump in the swimming pool right then & there and we pursued him for later. The lunch was great with many choice and felt like a great start for vacation. We retired to our hut and took a small nap. Around 16:30 we went for a open jeep road side safari. We saw many spotted dears on our way to mayor dam. On our way back we spotted wild Boar, peacocks; the driver/guide was great and he took us to a detour and we spotted Mongoose and Sambar Deer. Sambar Deer was very shy and camouflaged and being dark could not take any picture.


Coming back to JungleHut we found the B’day part just finished but there were cakes and etc. We celebrated the same and got freshened up. The dinner was excellent with a touch of continental food. Aarush was very happy as there were many others around his age group and had a good time before retiring to bed. It was decided next morning Pamela will go for walk into the nearby jungle in the early morning . This track sound very promising as the Sunday Morning people were able to spot a leopard.


Pamela and another lady left for tracking early next morning and they spotted one sloth bear just outside the resort. Rest of the track they spotted plenty of birds no more luck with big cat. Me & Aarush dipped into the pool and had great fun; being Monday most of the guest left for home and the resort became little deserted. Within the resort we spotted woodpecker and other birds. In the afternoon post lunch we went back to Bandipur (Karnataka Side) for safari. And were extremely lucky to see one sleeping tiger. Apart from these we spotted many dears, peacocks (in umpteen no.) wild boar, elephants as well.


Tuesday morning it was my turn for morning jungle safari. I was alone with the guide we spotted sambar deer and others. While trekking we could hear noise of wild animal roaring from very nearby (it seems animal spotted us) but I couldn’t see any. Well, after breakfast we headed out for Ooty.