Day-4, Morning we woke up early and headed towards to Bansankari Temple to start our day. Bansankari has lady idol with eight hands which is worshiped meticulously around. We saw one lady rolling herself around the whole temple periphery with wet cloth which signifies she just took a bath in the nearby holy-pond. We got a good darshan of the devi idol as there was not much crowd in the morning.


We came to hotel and waited for our breakfast which was bit late as we woke up early. After breakfast we headed for the Badami caves. Badami has 4 caves inspired by Ellora. There are lots of monkeys in the base and cave-1 (dedicated to lord Shiva). You must not carry any food or water bottle, we got ourself a guide who has been in this business for last 20 years and he explained in details each cave and allowed us enough time to take plenty of pictures. Though the objects are same as we have seen in Hampi, Aihole and Patadkal but as they curved them out of the rock and created temple in cave formed these objected remained in better shape as at least they are saved from direct rain. 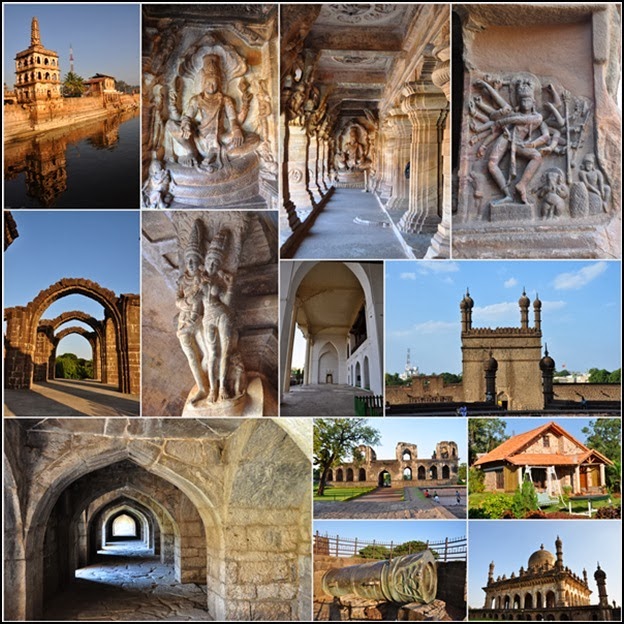 Once we completed all the caves we took our car through the busy market, I just stopped at times for few minutes before moving another inch as there was no space on both ends. Somehow we reached the Bhutanatha temple again Aarush opted for staying in car and we quickly went around the temple.


We came to hotel to checkout and hotel guys suggested we should go to Mahakuta temple before headed in towards Bijapur. This is a Shiva Temple and there is a pond which is considered quite holy to take a dip. After spending a short time there we headed towards to Bijapur directly skipping lunch.


The afternoon sun was hot like last two days and we continued nonstop to Bijapur( 120 KM). Personally was not very favorable about this choice as thought of having a lunch at Badami before heading towards the highway.
Anyway reached Bijapur and we opted for Hotel Pearl on Station road. The hotel is a very basic one and does not carry any recommendation, some websites and friends mentioned about Hotel Madhuvan were we did enquire from Bangalore. Any way after a quick checkin we headed towards the attractions of Bijapur.


We started with Jod Gumbaz (twin tomb) and from there we went to Ibrahim Rauza. As we were shooting photograph one guide appeared to offer his service. We agreed for a town wide tour with whatever can be covered in the remaining sun light. It was good to have him in the car as we did not have to ask for any direction every non and then and moved from one attraction to another. We covered Malik-e-Maidan(the great canon), Barakaman, Jami Masjid , Taj Bawdi, Mehtar Mahal, Asar Mahal. The only key attraction that was left was Gol Gumaz and guide told us the history and asked us to get up early in the morning to get good experience of the same.


He left us around 6 PM next to the Barakaman in one restaurant where we three tired and hungry person waited for their service to start at 7. Aaursh did his best had some food and we also quickly finished our food and headed to hotel. There was no hot water anymore and we were told it will start again in the morning 4. Really hated the whole thing.