Singapore has so many ethnic cuisines to offer for its natives that you have to stay long to explore all the corners. Food is highly influenced by Malaysian, Chinese, Indonesian and none other but South Indian too. Even annually Singapore government organizes “Singapore Food Festival” in month of July. I was lucky enough to get a glimpse of it. When it is a matter of food I consider myself to be “not a typical desi” sticking only to one variety of food. I love to explore as much as I can. But of course at same time I try to avoid certain meat other then duck, chicken, turkey,lamb or goat. So, after that only sausages or bacons can make way to my plate with choice rest I do not like to taste due to various personal reasons. Well, please do not be surprised as I went very specific with meat. As, according to French there are so many delicious delicacies to taste ; that do not think only about Chinese or Korean if you are a vegetarian.
Recently, I had Red chilli chicken from a western wok at my lunch. For lunch, we have a food court opposite to our Singapore office. It is not specific to any company; it seems there are few others nearby as well. Variation ranges from Indian to Japanese to even cross-cultural fusion. So a lot to choose from if you can figure out. I am not sure sometime what they have as main-ingredients. But this dish was simple to order as it said red chili chicken with rice. But, astonishing part was the numbers of chilies it had. At first, I was bit skeptical about its spiciness with so many chillies in plate but later I took a bite of one of those and found they are not as hot as they looked. A Good experience indeed:D.
The second picture of Fish curry is from a food court eatery; the curry was excellent… very close to Indian kind but then the down hill journey started for me. They said - you can choose two veggies as side dish and I opted for Spinach and peanut sauce. I specifically asked about the Peanut one as they mentioned it will be melange of sweet and sour savour. When I was ordering my plate it looked like that sauce had some sprouts but thank god I am not a vegetarian - infact it had some dry fish. But, as a whole this side-dish was a big thumbs down which changed my taste-buds …yuck!!! :.(
at Thursday, August 09, 2007 No comments:
Labels: Bon Appetite, ethnic cuisines, festival, food, journey, nap, picture, Singapore, Spinach

In India retail sector is growing like mushrooms especially in metro suburbs. Everybody is in this rat race; recently heavy weight Wal-Mart joined to open their stores in India and even reliance is now trying to negotiate with france based global retail major Carrefour (which is in air ). Some of the new retail stores are small and right around the corner competing with family owned generation old style grocery store. While some are big enough to keep you in their long maze of aisles for a while. Total turnover of this segment is quite high as we being second populated nation. Moreover now India has huge potential as an emerging market and is already a major sourcing base. As all these new stores try to establish their customer base they throw away “Special Offers” from time to time. It is a quick way to get attention and make sure cash in-flow is there.
Recently, we got a glossy pamphlet with daily newspaper and thought to check it out. So went yesterday evening its a nice store neither too big nor too small maybe size of 7-11 (US) or G20 (FR) to give you a fair idea(about size).


Issue that is making me write this blog is finding a rack full of Barilla pasta at the store called "SPINACH". Prices are not very high for these pastas around 85 Rupees for 500 grams (it is only 1 Euro in FR).The biggest disappointment was as we checked price of Olive oil which is 800 Rupees for a 700/750ml bottle. All I am sure it is Extra TAX Indian government imposes on importing Olive oil from EU (Greece or Spain in most cases). No way we are going to make pasta in India forget the price and availability of a good cheese which is one of the essential ingredient in making of pasta. Coming to cheese though our nation produces enough milk neither we have weather nor the technology to make cheese like emmental, ricotta, mozrilla, parmesan, roquefort or mascarpone. All you get here from local market is cheddar Ogh!. There are some stores in South-Mumbai where I am told you get other varieties for a price. Need to check before I comment.
at Saturday, March 10, 2007 1 comment:
Labels: Bombay, Brilla, car, Carrefour, grocery, market, mumbai, nap, Reliance, reliance fresh, retail sector, retail stores, Spain, Spinach, Wal-Mart

"Daney Daney Pey likha hain khaney waley kaa naam"- which colloquially means each grain has the name of the person who will eat it (it is the fortune of the person to have certain meal or not). Well the same with more of spice in Hindi movies "goli goli pey likha hain marney waley kaa naam" which means in each bullets it is written the name of the person who will die.
Before I take you along this blog I will try my best to keep the suspense why the introduction to a culinary adventure got its inspiration from Hindi muhavra & bollywood film.
Today we tried to prepare a Pasta dish bit different from our normal standard. Initially, Pamela did not showed much of interest maybe due to bit long procedure... must have thought to leave on me. But at the end, she seems to have willy-nilly enrolled in Italian cuisine and did all the steps to prepare this awesome dish - recipe to die for without killing for.
Spinach and Ricotta Conchiglie - Conchiglie which means large pasta conch (a kind of shell) designed to hold delicious stuffing in our case it was mixture of chopped spinach and ricotta cheese. Having concave shapes they are one of the most useful shapes as they trap any sauce. Till far we have prepared-long pasta like spaghetti, spiral shaped fusilli, butterfly shaped farfalle, stuffed ravioli either with fresh crème sauce, tomato sauce or pesto sauce. Even we have tried flat pasta lasagna designed to be baked between layers of sauce.
Pasta is one of the staple food of every authentic Italian meal & most versatile food too. It is considered to be low-fat food and rich in complex carbohydrate. But, it is important to take care while choosing sauce as overloading it with cheese or cream sauce will change pasta into high-fat food and of course the number one rule of great Italian cuisine is fresh is best.
Actually, prima facie on the colorful picture of the recipe in the book on Vegetarian by Nicolas Graimes, drew my attention and I thought why not to try it. Well, with out going to reveal the secret of this recipe here are the pictures as the cooking progressed. In other words, let me try to limn an entire procedure through photos taken by me. Hope silence speaks the volume in that way I will not be infringing coyright as Pamela did in previous post.
Finally, the suspense-what made me wrote “Daney Daney Pey .... naam” - is actually I invited one French friend (person who taught us to prepare any pasta ) for dinner and due to some miscommunications he did not showed up. So, it was two of us who had our mouth-watering irresistable pasta, supple in texture and deliciously sauced and stuffed (bit of boasting on my part may-be). But truly, it came out so good that we two were left licking and relishing every morsel. It would have been our pleasure to share a meal with our friend :( but surely next time :) 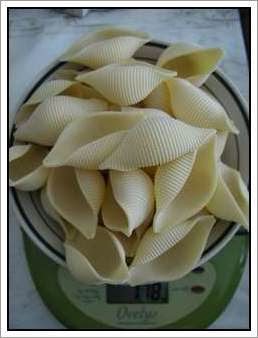 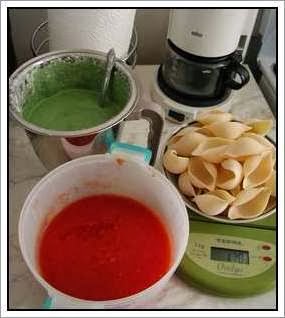 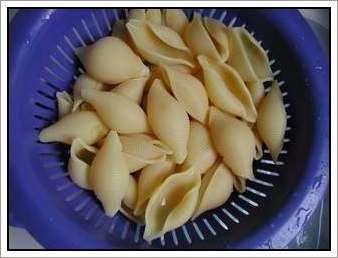 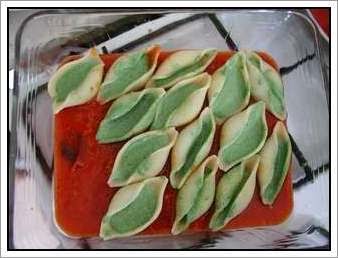 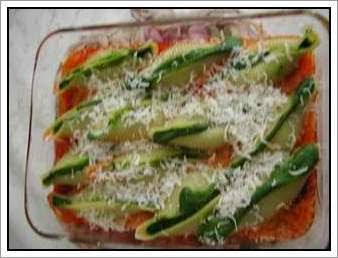 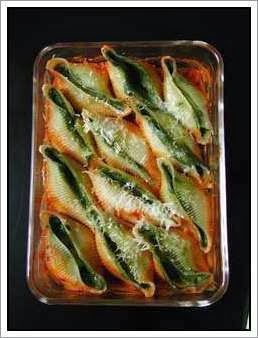 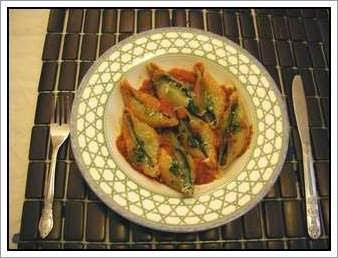