As mentioned we split  the travel in October with a week in between at Bangalore  Durga Pooja.  The destination for part two had to have sea and beach to cleansing the body and soul. Personally more of sea person if I have to choose between hills & sea.  We settled for Mangalore.  We booked for one hotel in the city which had maximum discount for 3 nights. We tried SumerSands the number-Uno destination for Managlore on travel. Now a resort with private beach was actually made for Expats community.


We started from Bangalore at 5 AM Sharp this time after loading the car with bags and baggage previous night. We were running low with cash but opted to find an ATM along the road and left Bangalore in hurry. This time road to Nilmangala  via Yashwantpur was more pleasant compared to last week and soon we were on NH 48. Till Kunigal  the road is now a proper 4 Lanes with tool. We paid toll twice on this part of the road but I was not complaining as I was doing constant 110/120 Km/Hr. The road from Hassan was old  undivided two lanes. But as we left early we did not face any traffic and we were soon near Sakleshpur. It was only 7:45 and I could not believe myself  that we crossed 223 KM in 2:30 hours in Indian road. 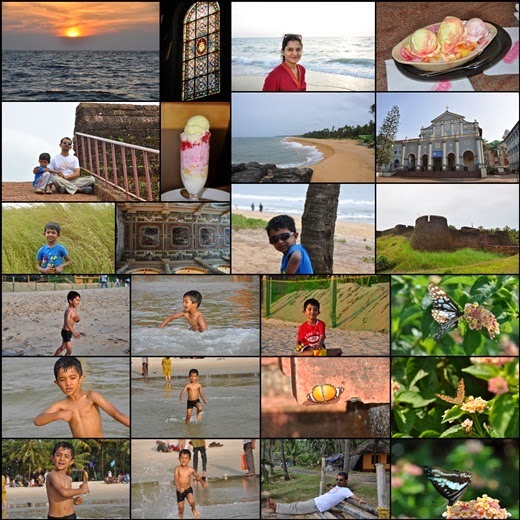 We stopped for ATM and got the dough, but missed the petrol pump next door. After breakfast, we wanted to fill fuel as the fuel needle was touching “E”. but to our surprise we crossed the small town of Sakleshpur and was already  started  the famous  Shiradi Ghat section. Soon we realized our mobile phones are out of network,  panicked little bit as there was no way to find out how far is the next petrol station. Switched off the  AC to gain one/two Kilometers of extra millage. The road condition detoriated as the pot holes got bigger and bigger.  The fuel needle was touching “E” but luckily the LED did not glow constantly. It became ON once or twice. We asked few groups of truck drivers  and their answer were very promising.  The milestones were not that comforting as they did not tell us how far we are from Gas Station.


Soon we crossed a forest check post, and we asked how far is the petrol station and got the best news the next one only couple of KM away. And just like that the Ghat section ended we filled full tank and headed for Mangalore. There was long queue for paying 5 Rupees Toll just outside Mangalore but with that we still managed to reach Managalore city by 11:30.  Nokia’s GPS was very accurate and we reached the major landmark (Hampankatta Circle) near our  Saffron Boutique Hotel  but from there it took another 10-15 minutes to reach there.


The hotel was great , newly renovated and we had a simple veg. lunch there. But the temperature and humidity was a killer and we decided for a nap.


After nap we drove towards Ullal ( 10KM south ) from Mangalore for Summer Sands. We reached soon and it was very hot at 16:00.  They charged us 100 INR per person at the gate and gave us some snacks voucher. Aarush was very impatient to get into the water. But after spending some time in the shade eating the snacks me and Aarush changed and got into the water. The beach being private was clean but it is  very rough where no one ventured to go inside deep water,  as back wave was really dangerous. I needed to keep an constant eye on Aaursh, as few times he got drifted from his seating place with the wave. He  really  played a lot;  was not happy to get out.


But now when he got out we were worried what to give for dinner as it was only 19:00.  Dinner was not  ready before 19:30 but with request the resort was able to serve us food little early and we   had a quick dinner for ourselves. On the way back, I had to stop in front of a shop which had street light to check my rear bumper which was making little sound. The shop owner was  true “Good Samaritan” fixed the bumper for free using his indigenous skills and technique which really lasted long.


Next morning, after breakfast we left for North direction  driving past Managalore port, Chemical factory and major refinery. We drove to  Panambur beach first, the beach was OK OK nothing great. There is one light house with little shacks. After that we crossed  Surathkal (KREC, Alma matter of my younger brother) according to guidebook Surathkal beach is one of the clean and hidden gem of Mangalore but we skipped it for Udupi. Udupi is famous for it Krishna Temple and during noon you get Prasad as whole meal. Udupi and its cuisine can be found across India famous for vegetarian  dishes.  The direction to temple was clear but as we approached, the road got narrower and parking became difficult. After parking the car in a designated parking lot we walked  to reach the temple. The Sun was a real killer. There was some queue in the temple but not very long. After paying our homage to Lord Krisha we were waiting for the special Prasad and after 40 minutes or so understood there was no Prasad that day as it was ‘Ekadashi (eleventh day of moon calendar).


We came out of the temple and walked back to car and not sure what to do next. We were hungry but the Sun and heat suggested stay inside only. So after deliberation  headed for Malpe beach. We missed the sign for beach and took a detour around Maple jetty oh! boy there was the smell of fish.  There was one nice big resort called Paradise. We stopped there had a long lunch intentionally and ordered desert and cold drinks in steps just to kill time we almost sat there for 3 hours. At last around 4 headed for the beach.


The beach was crowded but soon we realized this has one of the best ‘white –sand’ we have been to.  The waves were more gentle compared to its southern cousin and there were many adventure activities going on. You can go up in the parachute ride, the banana ride and water jet. Me and Aarush enjoyed a long stay in the warm water.  Once it started to get dark we left the beach and headed towards the car. We could not even leave Malpe when the thunderstorm hit us. It was heavy  rain with lighting. It caused havoc on the road. We continued driving and probably the worst rain driving for me. Ultimately,  stopped and pull over as it was little scary to drive behind red lights of other car with no visibility of the general road.  But any way we could not stop for ever - so after 10/15 minutes started and continued driving.  We reached a rain soaked Mangalore quite late.


Took an Auto from Hotel after getting fresh and headed  for a small fast food place called “Hot Bitez” Oppsite  Canara College on Jail Road. We picked this place from a blog with a catchy title .  Well, the food was OK OK  with fries and burger you can be never be wrong with Aarush, On our way back we enjoyed the festival of “Dusherra rally” where children to adult dress up like tiger and they are accompanied by drums and music. It is like a carnival. They start from the city center and go around. The party starts around midnight and last till wee hours of the morning. We were tired to enjoy this for long. But it was a shame of not having DSLR with us to capture the color and expression at that time.


Next day, after a breakfast we drove down south again and this time we drove for 70 KM south and visit the famous Bekal fort in Kerala. The fort was built around 1650 over 40 acres of land. In recent time it got prominent when famous director Mani Ratnam shoot his mega film Bombay in early nineties.  A very beautiful fort with many watch towers, with  breath taking view of Arabian sea as we walked along the parameters.


It was a holiday on the occasion of Id,  complete Kerala was closed. We made a big fool of ourselves by not having food at Bekal Fort before leaving from there. We reached  Summersand again and had a late lunch there. After spending time on beach we opted to leave early and have a proper dinner in Mangalore city. We asked our hotel reception to suggest a Mangalorian restaurant and they suggested one. We went by auto and the place was nice, crowded with families waiting for their turn. We were really hungry and ordered  lots of food. The food came after some time but it was so spicy that Pamela who normally handles hot and spicy food well could not handle too. It was a disaster in simple words, Aarush was very sleepy and we could not force him much.


Next day, was our last day in Mangalore and we started slow. We visited the famous ‘St. Aloysius Chapel” which is inside a educational campus. There are beautiful stained glass and the floor is simply awesome with mosaic. We went by auto and after spending sometime went to picture butterfly in near by Tagore park. After that we just walked back towards our hotel . We stopped at the famous Ideal Ice Cream Parlor and tried  their famous “Gadbad”. Aaursh really liked it as it was his breakfast and soon we ordered the Dilkush,  after the big ice-creams we headed back to our room, packed our things, payed the bill and started for Bangalore.


This time our tank was full when we cross Ghat section but as we crossed it around mid-day there were traffic and driving uphill had its own fun on those curves. Just after crossing Chikmanglur town we stopped for lunch. It was very crowded. Post lunch we drove straight to Bangalore without any stop.
at Monday, March 04, 2013 No comments:
Labels: Arabian sea, Bekal fort, Karnataka, Krishna Temple, Malpe beach, Mangalore, Mani Ratnam, Maple jetty, Panambur beach, Saffron Boutique Hotel, St. Aloysius Chapel, sumersands, Surathkal beach, Udupi
Older Posts Home
Subscribe to: Posts (Atom)