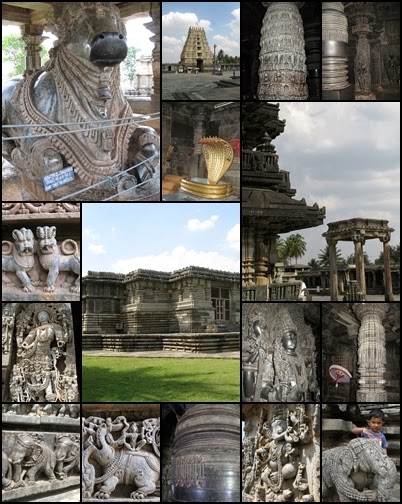 It has been a long time that we ventured on NH-48; last time we visited Shravanabelagola in 2009. From then on it was always in discussion to visit Belur-Halebid known for its hoysala architecture. This time we covered both Belur-Halebid along with Chigmanglur on 3 day trip.  We started at 7.10AM from our parking lot and reached Halebid by 12 with two breaks - breakfast at Hotel Mayura and at Hassan for ATM.
Compared to 2009 road was far far better and journey was smooth. Still there are many parts where road work is going on and it is not yet divided 4 lane highway and around Kunigal there are some bad pot holes. On reaching Halebid we hired a guide for 200 INR which was in-fact must to know the details and history. The whole architecture is made of soap stone. He carried small mirror to reflect the sunlight in order to explain intricate details of temple.
Halebid’s patron God is Shiva and the temple was built by the minister in honour of the King and the Queen. This is an incomplete construction where 3 generations of workers have worked but in many places you will notice ‘works in progress. It has suffered most damages amongst the three Somnathpura, Halebid and Belur. Today Helebedu in Kanada literally means ‘an old town’ to reflect its neglected past.   It is unique with its two gigantic figures of Nandi (sacred bull) - One of them houses Vishnuvardhana Hoysaleshwara (King) and the other Shanthaleshwara (Queen). The bulls are decorated in distinct male and female ornaments to reflect whom they belong. The temple walls are covered with figures of men in battles, dancing women, Hindu deities, birds and animals. A stone platform is there at the centre of the hall where queen used to dance for the Lord Chennakeshava. Temple stands in the middle of a peaceful park by the side of a lake.
Our guide enlightened us with an interesting tale that many sculptures were stolen and taken away by the British when they left India and those idols are now gracing homes in England and elsewhere. It takes at least two hours to take a round of the temple exteriors. There is so much to see in just one temple that we completely lost track of time here.
Jain basadi is very near to Hoysaleswara temple which are equally rich in sculptural detail they are famous for its pillars, which are highly polished almost resembling mirrors. First is Parshwanatha basadi- this complex consists of three temples. Famous is the Parswanathaswamy Temple, which has a 14 ft high figure made of black stone. A seven-headed serpent has been imprinted on the head of this figure. Adinathaswamy (central mandir) and Shanthinathaswamy are the other two temples here.
At road end there is Kedareshwara temple but there was no one except us visiting the temple.  Though it shares same architectural elements with its neighbour it is a miniature of the former.
From here we went to Belur at just 16 km apart it is a living town. Entrance to both the Hoysaleshwara temple and the Chennakeshava temple is free. The Chennakeshava Temple in Belur is dedicated to the Hindu god Vishnu and active worship still goes on in this temple while Halebid temple, though open to the public, is no longer in use for devotional purposes. Like the Hoysaleshwara Temple, the Chennakeshavatemple is star-shaped and stands on a platform. Elephants, episodes from the epics, sensuous dancers nothing was left without being carved. Forty-six pillars support the extensive hall, each of a different design. The Narasimha pillar is worth watching.
The sculpted inner & outer walls of the temple tell a tale of dedication and sheer hard work by the craftsmen. Each figure is carved to perfection and straining to come to life any moment. The celestial beauties depict the lifestyles of that time showing dancers, shringar, feeding the pets etc. The walls of the star-shaped temple are literally covered with sculptures in stone that depict the various events in the epics of Ramayana and Mahabharata. The star design starts from the platform and goes all the way up the walls and up to the top of the shikhara.
We skipped lunch in order to cover this area and can reach Chikmaglur before dusk. A day is enough to explore both sites if you think you are not too bored with sculptures. In Belur we didn’t hired guide which we regret later.

P.S.  As mentioned by Mr.Bhat the worship continues in Halebid temple.