Day – 1, As planned we left Bangalore quite late in our standard after a big breakfast at home around 11, the traffic on a Saturday as usual was very heavy and it continued that way till we crossed Nelamangala. After that the traffic got better but there were too many diversions as there was work going on to build flyovers and road widening on NH-4. We filled fuel somewhere after Nelamangala, and noticed there were not many decent stops like CCD or others. We did make a quick stop after one of those toll-plaza before Chitradurga to have lunch inside the car with the home cooked paratha (stuffed bread).


At Chitradurga we need to take an diversion and left NH-4 and continued on NH-13 (Solapur Highway). This is a undivided 2 lane road. There are not many small vehicles but lots of big rigs. We found lots of Sunflower field and stopped in one of them for a quick photo-shoot. The road is full of pot holes and unmarked speed breakers. But it was not that bad and I got used to it after a while and reached outskirts of Hospet around 4PM. There we saw the many mining dump-truck but this is just a small part compared to its neighbor Bellary.


Finding our destination Hotel Malligey was easy as it is quite well known, we checked in before dusk. The room were very spacious and we were welcomed by very friendly staff there. After getting freshen up we fixed a guide from hotel’s travel desk for next day. Initially we planned for 3 nights stay with 2 days of Hampi but Hotel people suggested we could shorten one day. Later realized it was a good idea as one gets bore with stone after a while. But if you are coming from a distance it might be a good idea to spend second day as there are many sights to cover. 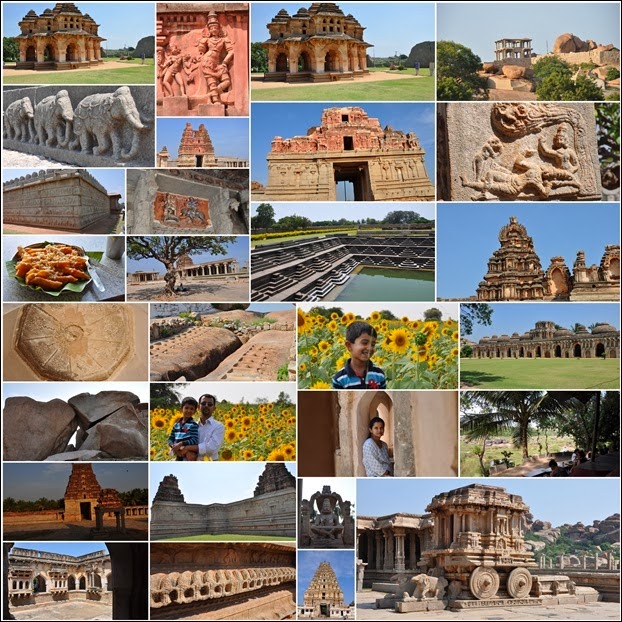 Day – 2, We started with complementary breakfast from hotel towards Hampi as our guide was waiting near his village. We picked him up and started with “Pattabhi Ram Mandir” . From there we went to “Vittala Temple” via “Talarigatta Gate”. From the car park there are golf cart which takes you to Vittala Temple (around 2 KM) via the historic market area. Tough it was just 10 on the watch but the Sun was too bright and hot. Our guide did a good job in explaining the details. From there we proceed to Royal Center.


We started with Saraswathi Temple, it was only us in this less visited temple. Next to it was Octagonal Bath, a place used by horse traders and other outsider. After that we came to Queen Bath a unique mix of Indian & Persian architecture. Each dome is designed differently. The peripheral verandah provided the required shade and privacy for royal women.


The ‘Mahanavami Dibba’ is a huge area with many sites within the key is off-course Dassara platform. The kings of Hampi used to celebrate Dassara a big way currently royal family Mysore celebrate the same. Aarush became bored with stones and fatigued with so hot sun, he preferred to stay in the car to play ‘angry bird’ ?


After this we moved our car to ‘Hazara Rama Temple’ a royal temple which depicts the Indian epic Ramayana on stone wall. This was a temple only for royal family to pray and enter. There is ‘Archeology Gallery and Office; which we skipped and headed straight to ‘Zenana(ladies) Enclosure’ . The key attraction inside is offcourse ‘elephant stable’ and ‘lotus mahal’ another key thing to notice is the watch towers. Each of them are different- one is circular and other one triangular. Now it was almost 12:30 and we agreed to stop for lunch and have a good break to avoid the sun which was really too hot to handle.


The number uno destination for food in Hampi is Mango Tree – a vegetarian place next to the Tungabhadra River under giant mango tree. You get all kinds of food which is a delicacy given the remoteness of Hampi. The best part was we ordered in parts to linger our stay in shade.


At around 3/3:30 we started again, and there is a road which connects to Virupaksha Temple. But looks like it is kind of private road where our guide opened a huge gate next to Mango Tree to let us in. Virupaksha temple is still a working temple and you will find Laxmi , the temple elephant there. After Virupaksha temple we crossed Hampi bazaar and drove uphill to Kadalekalu Ganesha. This is known as Hemakunta hill where many attraction can be covered on foot. But we skipped it as that would mean we have climb down the hill to Hampi Bazar again.


From there we went to Laxmi Narayan and Badavilinga temple. We drove past the famous two storied gateway. A perfect place to enjoy sunset among glowing granites. We headed to Krishna Temple and on route saw ‘Akka Tangi Gudda’ (sister stone) two giant boulders forming an arch. We visited underground Shiva temple next and noblemen quarter.


The sun was now dropping and we had a dilemma what to do next, our guide suggested we visit one more temple not so visited by tourist due to its offtrack location. The temple is Pattabhirama Temple a huge temple with stone carvings are still intact. We should have went to ‘Hemakunta hill’ to watch sun set but instead headed to Tungabhadra reservoir and got lost in Hospet town. It was a long day and Aarush went to sleep so headed to hotel.