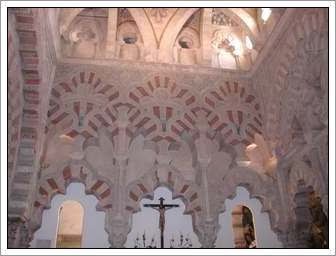 When we started planning for Andalusia we did not thought of Cordoba first. But later friends who had been there suggested visiting Cordoba.
We walked from our hotel on the busy morning streets of Seville to reach the train station. We bought ticket for AVE (fast train) to Cordoba. The fair is not at all expensive compared to French standard as it costs almost similar from Paris CDG airport to city center. The train service is really good and train travels in high speed.

Cordoba’s main attraction is its Mezquita(Mosque). This is a living history of Cordoba as it transforms from one culture and religion to other. It was one of the first big city that was built by Moorish rulers in Spain at 10th century. These leaders wanted to build a mosque for their religion. Earlier the mosque was small but with time as Cordoba prospered, it was extended to accommodate more people.

The double arch with red and white stripes makes a very immense effect to the visitors. These double arches are purely for decorative purpose but it is so unique. Later days when Christians gained their control over Cordoba this was converted to a Church with very little modification giving it a feeling of church inside the mosque. 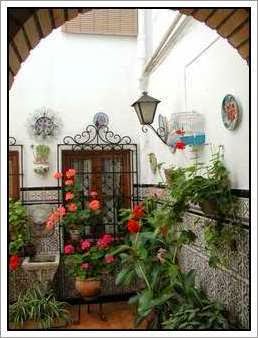 The `Mihrab` traditionally had two functions in Islamic worship, first it indicated the direction of Mecca (therefore prayer) and it also amplified the words of the Imam, the prayer leader. But The Cordoba Mosque Mihrab looks south in the same way as the Damascus mosque and not south east in the direction of Mecca. This one is very beautifully decorated with Islamic arts of gold on marble.

From there we went around various streets exploring beautiful patios of Cordoba. Best time is early May to visit the same. There is a competition for most beautiful patio in Cordoba, which means lots of patios to check out in early May.

We had a light snack of fruits and juice near to Alcazar. The afternoon was scorching hot. After waiting a good amount of time for the public bus we took a taxi back to train station. The ride in the AC car was worth (4 Euros) every penny as the outside was burning at 40 C.
at Wednesday, May 25, 2005 No comments:
Labels: airport, car, Cordoba, Córdoba Andalusia, Damascus mosque, people, rain, Spain, street, taxi
Older Posts Home
Subscribe to: Posts (Atom)