We followed road suggested by Mr. Vijay to reach Coonoor, which was quite deserted except few local people we were the only one on that road. This road goes via tea gardens and gives a treat to your eyes. Once we reached Coonoor we parked next to the bus stand and had a quick thali lunch in nearby busy restaurant. After that we headed towards our Farmstay - Wild Acre. The direction given by Mr. Mansoor is very accurate and we reached without any trouble. The location is just back of Coonoor bus stand and very well marked. 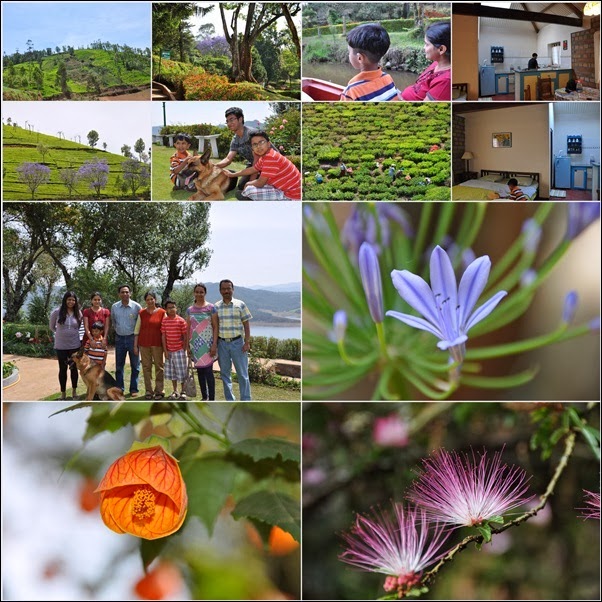 After putting our stuffs and a small introduction of the cheese and farm and its produce from Deepak we went out to explore Coonoor. We went to the botanical garden which has trees from all over the world. We must admire those British for bringing tree or plant from faraway places and making themselves feel at home far away from their motherland. Be it Shillong (summer capital of Assam in British days) or Coonoor, they have similarities with parks, lakes well planned roads in hills and old British Bungalows. Coming back to the botanical garden, it is well maintained but Indian common culture of eating and playing cricket anywhere and everywhere within the park will surely take a toll slowly on the green patches.


Aarush demanded to take a boat ride and as he was upset about leaving RedHill behind ;   we managed to get our turn quickly as there was no proper queue for boating. It took 10 minutes to complete the paddling.And after some photo shoots of here and there we left the botanical garden behind.


Next we drove through Wellington – a Indian Army Area. The whole area is under Indian Army and they have officer training camp and many other training facilities. Also there is a golf course which is really worth its name. After driving cluelessly we headed back to Acre Wild. We went down from our cottage to main dining area for dinner around 8 and literally forced them to cook on time. The food was OK, the quality and service was on the negative side. Though Mr. Monsoon appeared briefly and promised he will join ; but after many minutes of waiting and as food was getting cold we had our dinner and told them again and again to keep the breakfast ready for next day on time. 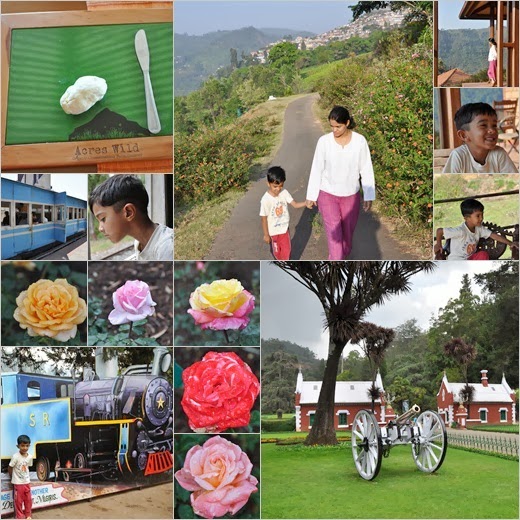 Next day we woke up around 7.00am and took morning walk through the farm and some picture shots of birds and surrounding scenic area before we went for breakfast. The breakfast included freshly baked bread and farm made cheese. It was much better than dinner we must admit. We met another family from Bangalore who were visiting Coonoor for the second time. We shared our previous night dinner experience and it seems they had the same on their first night and opted for self prepared dinner.


We had a big plan to ride the World Heritage Blue rail from Coonoor to Ooty and visit Ooty city and comeback. The railway station is a small one and parking was a nightmare as there were many many taxi, vans waiting for tourist coming in the peak of summer vacation. We booked the ticket of 1st class train ticket. And Parking attendee told me to wait and park once parking lots get little free after all passengers came to Coonoor moves out. It sound simple but it was not so....it was too congested and as I was driving backwards; scratched my bumper and everyone was honking at me. In mean time, Pamela was calling to tell the train is about to leave.


In that process I missed the train and had to drive from Connor to Ooty while Aarush and Pamela went by train. Pamela & Aarush were really upset, Aarush cried whole way thinking his dad was lost..... it was total disaster.Now after driving from Conoor to Ooty (via the main highway this time) was waiting at the railway station.  Pamela appeared unhappy with the situation but looking at car dent she didn't had anything else to say.


Having own car was bliss on other side, we reached botanical garden of Ooty to start with but with rotten mood. This time parking was OK and as we were taking a stroll within garden it started to rain. We took shelter in the glass house.  After botanical garden we drove to Ooty main market from there we came to Café Coffee Day for a break and it rained again. Lucky us, we dodged the rain twice. We saw tourists drenched in the sudden rain and shivering in cold.


After that we went to Rose Graden, by this time we could feel the chillness in Ooty’s air after the rain as day was coming to an end. After taking a full round of the rose garden we headed back to Coonoor. The Rose Garden is really big and has many varieties of rose from Japanese green to black rose.


We bought some packets of Maggi before entering Acre Wild. It was raining like dogs and cat as we had self prepared dinner. It was a day which ended with high note as we had our car and saved from rain.


Next day the breakfast was again a disappointment as no cheese no fresh bread. It was simple plain toast and omelet. Mrs. Mansoor joined us for breakfast as both the guest were leaving for Banglore. May be she was there to ensure we settled our bills properly or not. Any way I would not rate this place for hospitality. They have functional kitchen, clean bathroom and it is your choice to stay there or not. May be coming out of a great hospitality of Red Hills our expectation was high as we read many positive comments in travel forum and blogs.


Before heading back to Ooty we went around Wellington one more time. Crossing Ooty with traffic reminded us of reality. Traffic police tried their best to prevent us from going via the shortest route (36 hairpin bend). But we convinced them we will drive slow and maintain 2nd gear all along. Coming down a steep hill is always riskier than going up but we just followed the rules mentioned on the road. We drove in 2nd gear, no speeding, no overtaking and following lane.


We stopped Popeye's at Masinagudi, it is a fast food center with French Fires and burgers & wraps. The place is clean and has a clean toilet the food is decent and run by a lovely couple. What else to ask in the middle of nowhere.


We came across few tuskers of forest department as we cross Masinagudi jungle range. We did not stopped around Mysore and finally stopped at Café Coffee Day for a refreshment.
at Friday, December 21, 2012 No comments:
Labels: Coonoor, Masinagudi jungle, Ooty, Rose Graden, Tamil Nadu, Tamilnadu, Wellington
Older Posts Home
Subscribe to: Posts (Atom)