Day-5, Woke up at 4:30 in the morning as I could barely sleep whole night. Had mu bath and got little bit packing down to ensure we leave Bijapur at the earliest. Woke Pamela & Aarush around 5:30 and we started to walk to Gol Gumbaz. Unfortunately the lady who manages the ticket counter did not show up till 6:30. We were the first one to enter. After the local guard gving us little more history lesson asked us to climb the steps quickly before anyone. We climbed the seven story building using medieval steps which gets steeper as you climb. Aarsush did a great job of climbing all by himself. We were the only one at thw whispering gallery and able to whisper between ourselves across the hall. It is a amazing feeling of hearing the slightest of sound across football field. But after 10 minutes of so we got lousy intruders and we called it a go. Climbing down was more difficult at times. 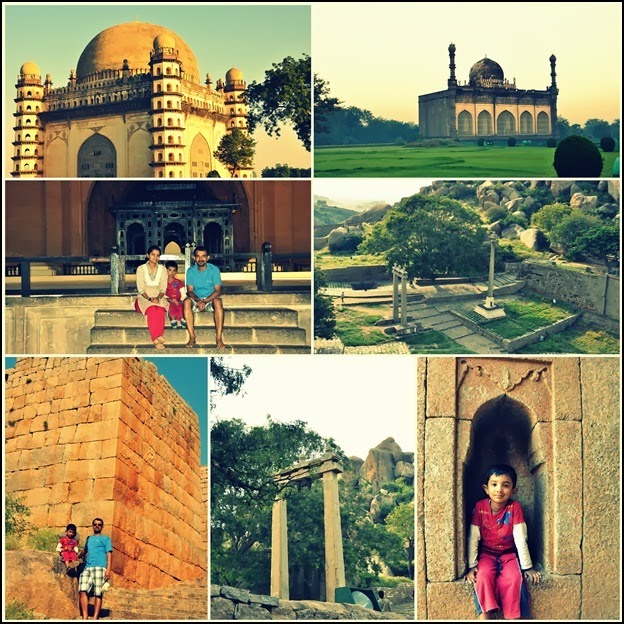 Reaching hotel we had breakfast and Aarush and Pamela took shower and by 9 headed out for Bangalore. The drive was again on newly constructed NH-13 and by 11 we reached Hospect. We did not stopped and continued driving and by 13:30 reached Chitradurga. We first tried Hotel Aishwarya Fort which was just a dignified bar bar and bar. We left it as me and Aarush even could not use their rest room. We came to Naveen Regency which was a pleasant surprise. The hotel was clean and there was no drinking in the restaurant which made it more comfortable.


After a nice lunch we headed for ‘Chitradurga Fort’ – Chitra(picture) durga(fort). This fort was built between 10-18th centuries by different rulers and at last post independence it was part of Mysore dynasty before handing over to Archaeological Survey of India (ASI). As it was weekday there were hardly any tourist there. Once we entered the fort one guide approached us and after little bargain he agreed to be our guide.


As the fort was built over many centuries it was like a mini town within the fort itself. There are many layers of walls to cross to reach the fort entry. To minimize any attack there are sharp turns, narrow but strong doors which can withstand attack from charging elephants. We kept on climbing as we explored the beauty and history. After a climb of 40/45 minutes we reached a plateau where there are the main temple and swing area.


From there we again climbed down to go to the back side of the fort. The back side of the fort is not that fortified. But it has natural boundaries. And most attack on th fort has been on the front as the accessibility is very poor. The attraction is “Onake Obavva”, where one lady managed to kill many soldiers of Hyder Ali as they tried to enter from the back. You can read it all here.( http://en.wikipedia.org/wiki/Onake_Obavva)


Now after many steps and ups and downs Aarush was tired and so are we. A day of climbing steps with history which started in morning in Bijapur. We started around 5 PM for Bangalore and did not make any stop as we missed one decent Kamat near Tumkur L . The traffic was horrible as usual and it got only worse as we approached home. We stopped at McDonald just in-front of our home as Aaursh was not happy with this trip at all .. all the temples .. daemons and mythological figures. Any way it was a long drive on the last day but very much doable.
at Wednesday, January 02, 2013 No comments:
Labels: Adil Shahi dynasty, Chitradurga, Chitradurga Fort, Gol Gumbaz, Karnataka, Onake Obavva, Whispering gallery
Older Posts Home
Subscribe to: Posts (Atom)