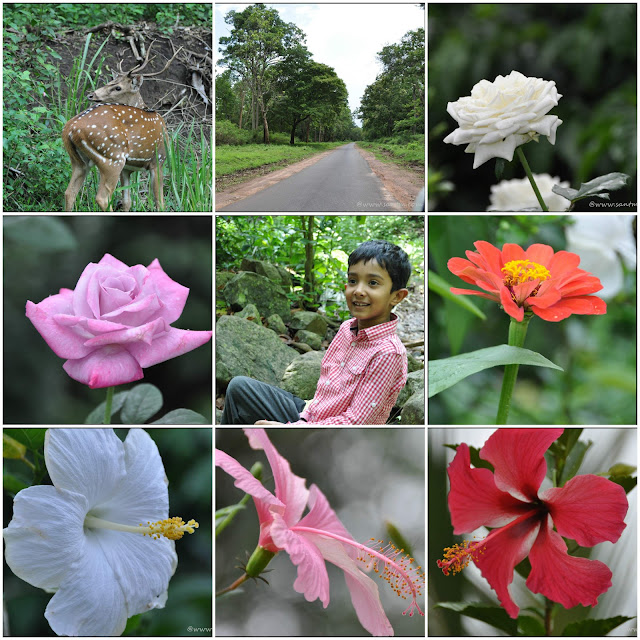 It is June. And honesty this year looks like going on faster speed then the previous ones. January was fun when we celebrated Aarush birthday with Misra Families. It was really great but that ended too soon. February and March was superfast with schools, exams and work. April We traveled to Durg, Pamela and Aarush sent 4 weeks there and here we are in end of May.

So just before school reopens we had out of Bangalore for 2 nights. We opted for something closer to home Coorg but on the southern side. We opted for this side as we been to more popular side near Madikeri in 2008 when Aarush was around 9 month old. Time do really fly.

We started at 8:30 from home, very late compared to our slandered but that day had Bangalore TCS 10K. We stopped for a break around 10:30 near Madur. We bypassed Mysore via Brindhavan Garden road and continued till Hunsur. Google Map was helpful and we took a bypass before Hunsur town and soon reached the gate of Nagarhole National Park. We need to make an entry in the logbook and were reminded no food, no music, no stopping and speed up to 30KMPH while crossing the park. We saw lots of spotted deer and few monkeys. But soon it started to rain heavily. The rain continued till our destination Kutta a small town. We stopped for a late lunch a placed called ‘Café Robusta’. Other than the name nothing was fancy and would suggest you might want to miss it but there are not many choices over there.

We easily found our homestay asking person on the road and following the sign to Irpu falls. After settled in in we went out for a stroll to nearby temple. The owner of the home stay has an excellent taste in maintaining her garden. Just to mention there were hundreds of flower pots of different times.

Next day we went to Irpu falls, only Aarush had a great time showering over there. After that we tried to stroll little mode but the weather was too hot. So we headed back to guest house and after shower had a big lunch and too a long nap. Evening we went out in search of ATM to nearby T.Shettigeri.

Next day after breakfast we headed out for Bangalore via Shrimangala & Gonikoppal . The road condition was great. We stopped at Mysore palace as Aarush said he wanted to see it. It was very crowded, And we did not enjoyed it so much. After lunch at Mysore we started back from there and experienced heavy storm and rain as we were about to reach home. Thankfully that rain just started and we were not stuck for long anywhere else it would been a different story at the end.

Now with school being open not sure when we will go out anywhere soon.