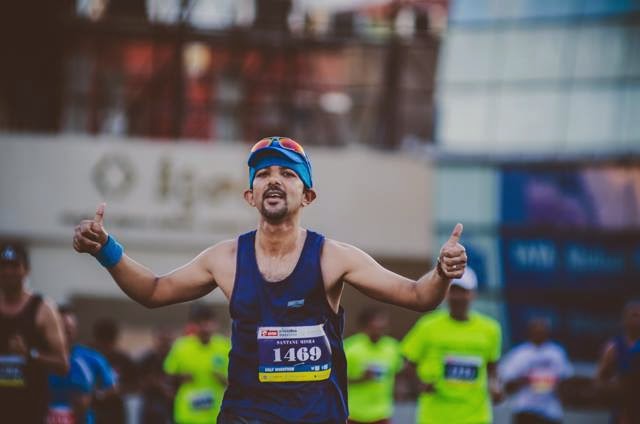 After Chennai DRHM event the event I signed up for was Airtel Hyderabad Half Marathon. This run is little special to me as received my first ever finisher T-shirt last year as a proof of my improvement in running. Also there is the big culinary charm of Dine-hill and Karachi biscuits as post run celebration.

Booked myself a return flight as soon as the dates for AHM 2014 was out. Few of my fellow runners also opted for the same as soon as I posted the same in our FaceBook group.

The initial count was around 40 people going from our group alone this year but pre-race almost half of them dropped out due to various reasons. Myself was in worst running form as I got a Viral beginning of August which kept me away from any physical activity for 2 weeks. Just before the race week restarted running and was not even in a position to complete an easy pace 20km before the race week.

The train journey on Garib-Rath was wonderful with all the fellow runners. This time I did not took any food for myself for own dinner but there was so much homemade food on the train from others. I did not get much sleep over night but it was OK.

We got down at Begaumpet railway station and another running group (BHUKMP) from Bangalore joined us. This time we were staying together in a super nice hotel called Marigold. It was a chatty walk from the railway station to the hotel. Hotel staffs were super-efficient as they managed to checked-in 60+ runners with ease and then we had a big breakfast. I had lots of healthy stuff lots of curd, fruits and muesli.

We went to expo from hotel thanks to Uber for free ride ;)

The expo was mixed bag most counters were well-organized and we were handed our running BIB and goody bag promptly but few were not so lucky. Met with lots of great runners with full ‘Josh’ (enthusiasm) whom came from across the country. Realized there will be no finisher t-shirt for the top runners from Nike. In a way it took off lots of pressure from me as I was not really ready for a race yet.

After watching TV and some nap I got up in the evening and joined the group again for a early dinner. Had a light dinner with lots of Dal (lenthil) and curd.

Race-day : Woke up around 4AM, had a quick shower and had two banana and couple of dates. Dressed myself for a hot and sunny day. Again thanks to Uber reached the starting point of Necklace road. By the time we finished warm-up could already feel it was going to be a very hot day.

I ensured to take water break at 2KM and 6KM early on. Thanks to Metro work there was some shades from those safety partitions. But soon they were also gone. I was running alone all along as could not find any one with a similar pace to run along. Most of the time I was crossing someone but there were few who crossed me along the whole path.

As I ran this race before I was mentally strong and was able to map the course mentally and pushed myself for the best. I was also ensure that I was enjoying the run I ensured to thank many volunteers and give them high-five as I crossed them The volunteers specially Waste Warriors did a superb job of ensuring the street remains clutter free. I had my Glue-Gel around 11KM mark I did not tried any pre-race gel.

All was going fine and I knew the last fly-over will be a killer and it really killed me. It was the worst as I almost lost the battle with it 18 KM was my slowest when I reviewed my Garmin later. I tried my best to push myself as I was approaching G. M. C. Balayogi Athletic Stadium. But to my surprise the entry to the stadium was changed from last year and I was completely hear-broken as I did not have any energy in myself to push further. Somewhere I knew it was only 500m to complete the race but I also not sure if it was 700m as did not want to victim of heat, dehydration and another DNF at the last meters.

I did what I best could and finished the race at 1:50:29. It was huge improvement compared to last year the result below is the testimony. The heat and sun was a killer this year and my face tells that.

In a way very happy that I finished strong but on the other hand I wished I had little extra energy and strategy to finish the same around 1:48 and wished to run along someone as it was a boring city roads and flyovers. 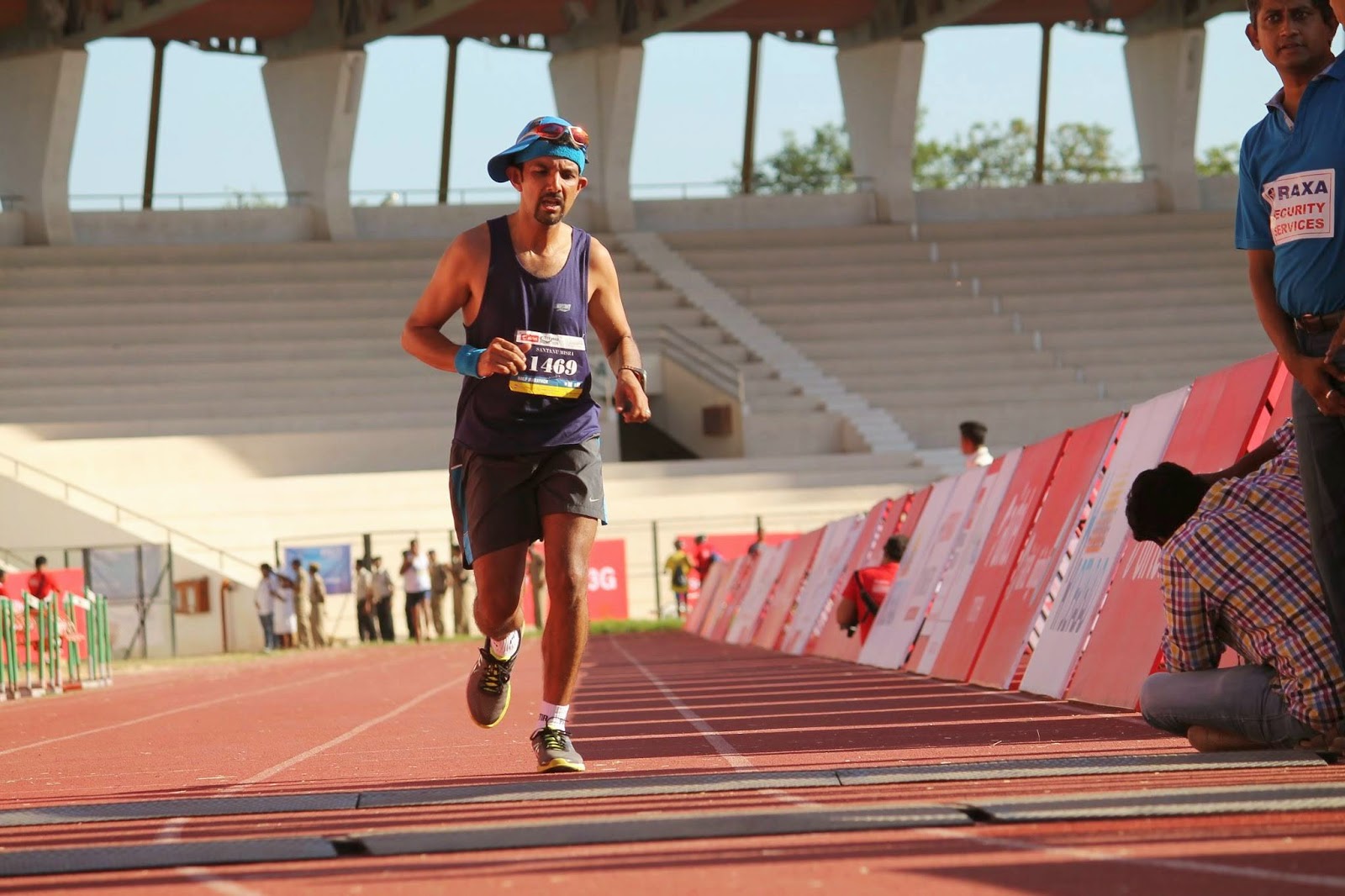 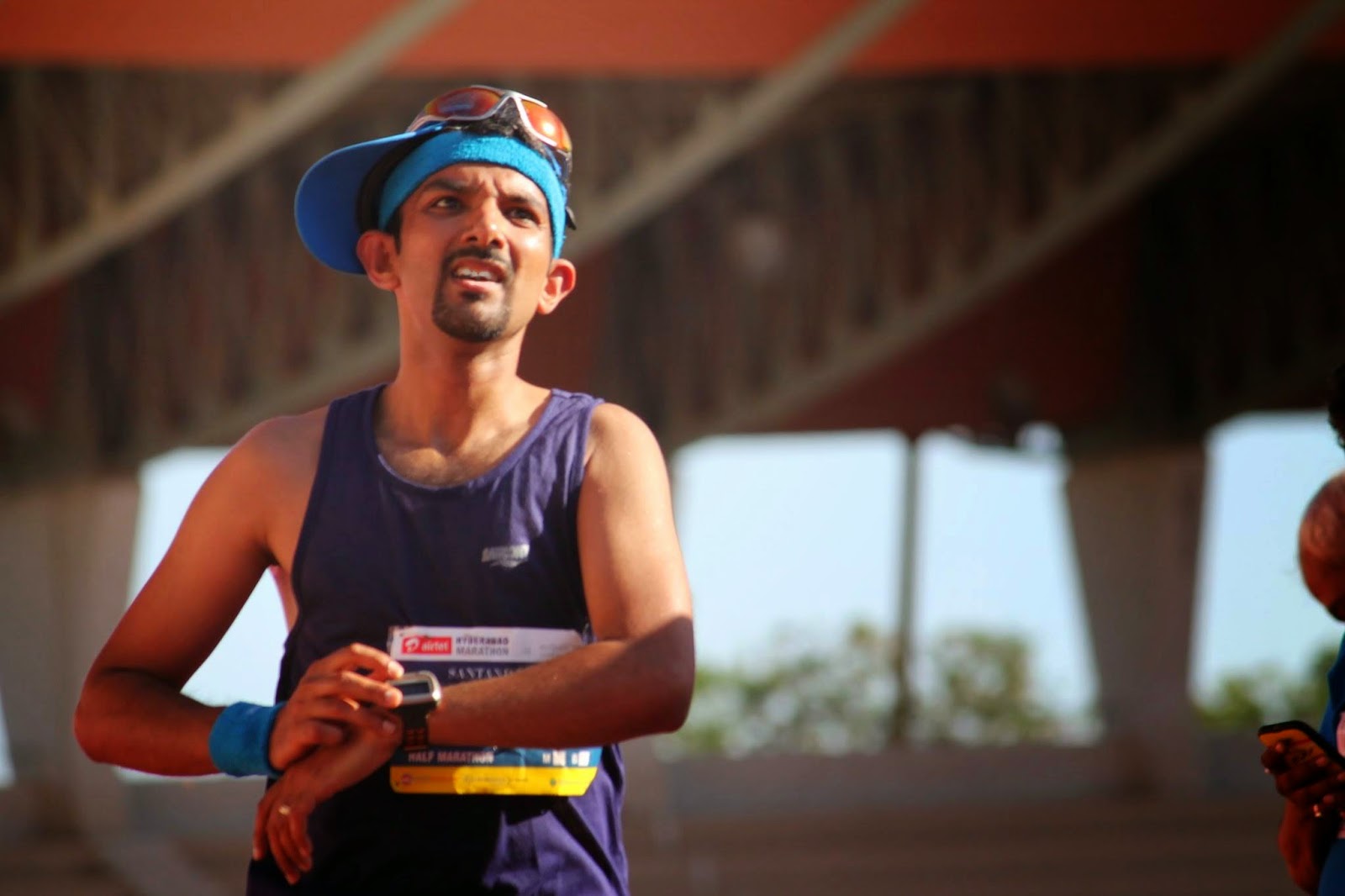