Chennai DRHM ( Dream Runners Half Marathon) was on 1st Sunday of July i.e. 7th July 2013. It was the first run out of Bangalore for me. Last time I registered for Mumbai Standard Chartered was in 2008 and was gifted with Aarush just few days before the race :D  Well Aarush is the reason why I can not run on weekdays morning but he is the catalyst who introduced me to The Pacemakers running group of Bangalore.


It was a great escape for me from Bangalore and daily routine. a big thanks to Pamela for supporting me on this. Knew it was not going to be my best run given the fact I was not practicing at all. The last time ran was beginning of June after that it was all about running around household and office work. Working late and on weekends and busy with Aarush's school and what not. In fact I was so messed up  posted The Pacemakers  Facebook page that “I am not going” but thanks to Pamela after an hour  posted  “I will” be going.

Thanks to fellow runners a cab was booked and woke up Saturday Morning at 4:30 and meet them at the gate at 5. We were at Containment Station by 5:40 where already few fellow runners were waiting, at 6:10 boarded the Shatabdi. The train journey was fun brought back the memory of college days where traveled  in a large group for the last time.  It was fun to be noisy and so many small group chit chat ... it was real entertaining.


As soon reached Chennai the humid heat welcomed us and oh! that smell of Chennai Central. Thanks to our Tamil friends we moved to the electrical (local)  train platform and took a local train towards hotel, the last part from station to hotel was long walk . We crossed many ministerial bungalows as walked from Station to our hotel Raj Palace.


Reaching hotel there was enough opinions for lunch venue/cuisine between 30+ hungry stomachs personally stayed back had the same in the hotel and had a long nap till dark. It was ladies Final at Wimbledon and soon our room was packed with 20+ people as it is more fun to watch in group. Everyone thought it would be a big fight between German and French. But Bartoli finished the tournament quickly in a straight set with ace. Well she did not beat any big names in this tournament but she beat those who did ... a dream came true.


Dinner was like lunch again many opinion and this time personally went out to explore little beyond hotel to ‘Saravana Bhavan’ the place was packed as usual and had Paneer Dosa a foolish choice before a long run tried to mitigate with Dahi Vada (yogurt to neutralize the richness of Cottage Cheese and oil) . The bus ride back to hotel was long we had we had a walk mile personally liked it after a big meal. 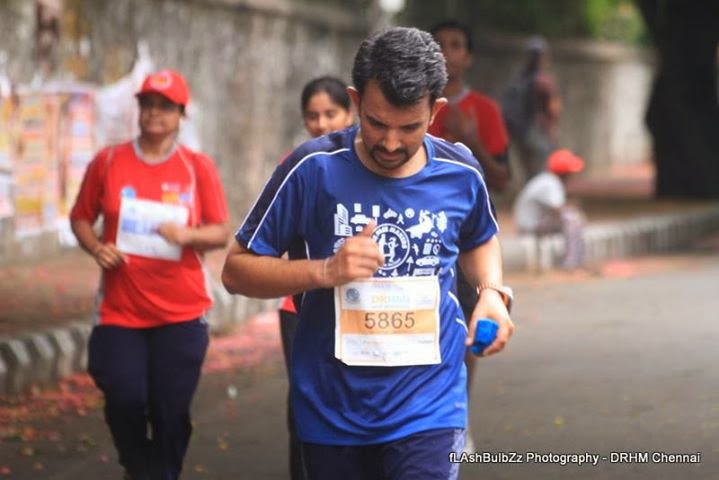 Woke up at 3:30 had a quick shower and realized it is going to be a tough one as was not feeling good in stomach. We were supposed to be out of hotel by 4 but there was big time drama by the arranged cab drivers, was part of the last drop. The sky was dark with cloud and it rained a lot in the night but still the weather felt hot and very very humid bay around 75~85%  precipitation. Tried to follow Coach’s warm-up session but the school ground was full of sand and dropped out from the running one. The race started at 5 and started my stop watch for the first time running with a watch and that too a GPS enabled,  started with few pacemakers for the first few kilometers and then started running of my own pace which  felt very good about. And every Kilometers Garmin showed my speed and all was looking very nice. Soon say the lead runner coming back and it was none other than our Nanjundappa. The second runner was at least a KM behind him. Soon saw many of the Pacemakers taking the turn. But my run took a downhill  as I struggled from 13KM onwards. I felt there are too much water in my bladder and I am tired from the humid condition.  So I walked run and continued till the end and many people crossed me in that process. The 2 KM I tried again to push myself but by that time I was out. As soon as I finished the race said bye to pacemakers group and walked back to hotel. Well it was a long walk but did not want to haggle with Autos.


The race was very organized with lots of police and volunteers and roads are so good that it does not seem like India. The coarse was also perfect as we ran along Bay of Bengal and the famous Marina Bay only humidity was a concern but there is no way we can avoid that in this time of the year. The sun was completely out as sky was covered with dark cloud I think it can not be better than this in July in Chennai.

Reaching Hotel, freshened up had a big breakfast and by that time all others also came back. There was a celebration in hotel where someone walked and got beers  personally skipped beer just after exercise but the fun was too good to be missed.  The train  journey back was as much fun but this time everyone was little bit tired. Enjoyed every moment of this trip and next is one going to be Hyderabad Half Marathon  in late August. Well the result below is wrong to my it will be in the range of 2:27. In TCS 10k official time made me mad now it is making me smile :D