(....Continued) Soon after leaving Brindhavan garden and on touching the highway (SH88) road condition improved which looked like recently renovated. Aarush was fast asleep after having his lunch which always translates in smooth driving and I was able to drive at 80-90 KM. Along the road crossed Bilikere, Husur & Piriyapatna before reaching Bylakuppe. It is an odd name which houses one of the largest Tibetan settlement in India. We had to take a left turn from SH88 to go to the monasteries. As soon as we took left turn we almost felt like driving in North-East where you are greeted with Mongolian faces. There were bright prayer flags along the road which symbolizes hope where as white ones are for death. 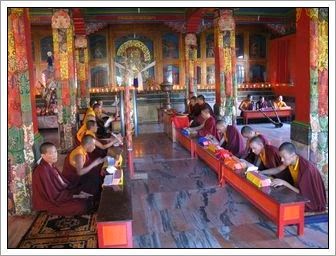 This is really a bit of surreal - you are at middle of Karnataka, only few hundred kilometers away from Bangalore and surrounded by thousands of Buddhists monks and families. These people have left their home land almost 40 years ago and new generation are born here only. Still they keep their faith and tradition alive for generation to come. Like all Tibetan settlements in India here also one requires special permit for "Non Indian(foreigner)" to visit.
We went to Kagyu monastery first. This one sits on a hill top from where you can see “Nalanda Institute” and other monasteries. The largest of these 4 monasteries is Namdroling or commonly known as “Golden Temple”. That day sky was in perfect blue and shrine with bright colors were looking magnificent. Unfortunately, we ran out of battery(camera) inside Namdroling. Aarush was bit startled with humming sound and to see monks playing big drums. 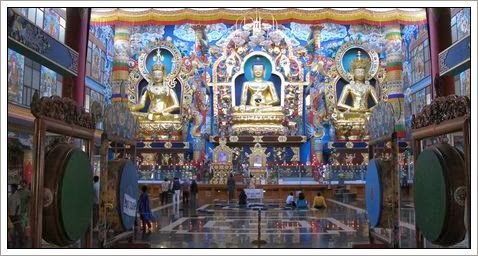 For facts lovers the original name of Namdroling was "Thegchog Namdrol Shedrub Dargyeling" luckily his Holiness Dalai Lama shorten the name during his visit. Around 5000 monks are today studying there. 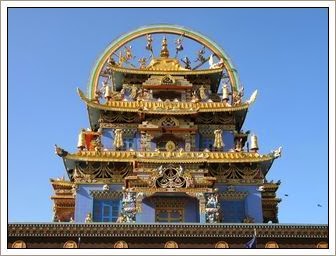 There is a big shopping area with lots of souvenir shops, ATM and restaurant. Lots of magnificent stone show pieces were available which were expensive for my budget. After having a very late lunch - momo (it was not that great we get better momos at Siliguri - my home town) we started for our homestay which was still hours away. 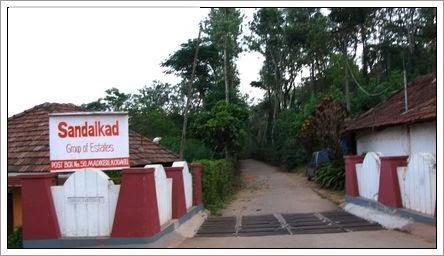 After Kushalnagar the road condition was not that good as lots of work is going on to widen the road. Only mobile network which really works on mountain road is of BSNL; both of our phones with private networks put us on thought how to locate our home-stay. We entered an estate as soon as we saw name “Sandal” on it. After driving 1-2 km through coffee estate we realized we are in wrong place, luckily we found a good Samaritan who lent his mobile (BSNL) to call our home-stay for more specific direction. It turned out our home-stay is another 6 KM ahead on that highway. With more information on route direction we were able to find our home-stay. This being a first time at home-stay we were bit shy as we reached at our host’s door. (To be Continued....)

Madikeri and around | Aashiyana of Pamela Santanu said...

[...] (….Continued…) Next day we woke up leisurely had a wonderful breakfast . Our host meticulously wrote down all the attractions near Madikeri. The list included Tala-Cauvery – birth place of river Kaveri, Raja seat, Abby Falls, Omkareshwara Temple, Cauvery- Nisargadhama. We decided for all except the last one as we wanted to take it easy and not rushing between attractions. [...]