After coming back from Italy we were looking for a week long vacation and the obvious choice was Greece but waited till Olympics 2004 to finish. We figured out from all the guidebooks and Internet that all the major historical sites are quite far from each others. As we had no plan for renting and driving we opted a guided tour for the main attractions. We were very skeptical initially but at the end it turned to be very good meeting new people and quality of service was very good. After finishing our 5-day trip we went back to Athens and from there we went to Santorini. The most famous Cycladic island in the Aegean Sea where I realized I got one more year older. We started from Paris Friday evening and reached at midnight.


We started our day early as the tour bus picked us at 7:20AM. After getting transferred to another bus we headed out of Athens on Saturday morning. The first we made was at Corinth Canal 80 KM south of Athens.


This is a manmade canal 6 kilometer long which connects Gulf of Corinth in northwest and Sardonic Gulf in the southeast. Ancient Greeks knew the importance of this location. Journey between Aegean and Adriatic was other wise longer around Peloponnese. The canal was built in 1890.


Before the canal was build the old Greeks started using a unique technique in the years of 600 BC. They made a stone road and then transferred the ships from one side to the other over a wheeled platform known as `diolkos`.


From there we went to visit the remains of Mycenae civilization. This site is one of oldest site in Greek civilization. The first was around 4000BC but the peak was around 1200 BC late Bronze Age. Next to it is Mycenaean tholos tomb, it consists of circular burial chamber with a long passage. The keystone is at the center of dome. And it used to place very delicately fearing the structure will collapse in itself if the pressure was too much. 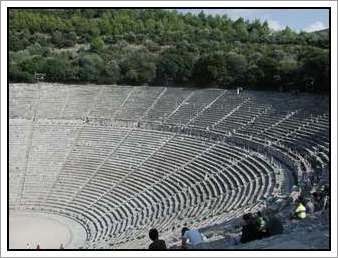 After lunch we vised Epidaurus. Theatre of Ancient Epidaurus has the best natural accosting where the sound is heard all over the theater with same volume and clarity. The factors are the oval shape, the stones that are used and most of the air that is blowing from stage to audience.


From there we went to Nafplion we spent the evening and night there. Nafplion was the capital for Greece when it was getting out of Ottoman rules before capital was moved to Athens.